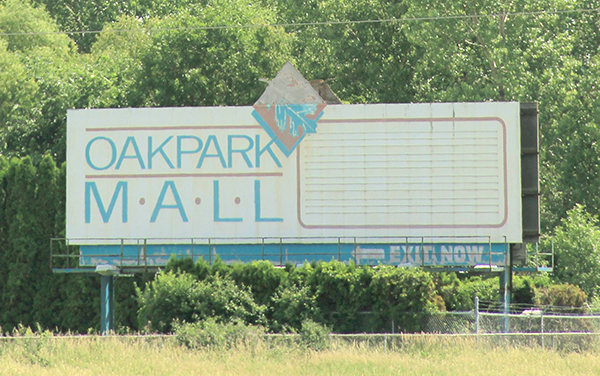 Though Oak Park Mall closed its doors late last year, there are still no firm answers on the future of the property after plans to develop it into a Hy-Vee fell through. – Jason Schoonover/Albert Lea Tribune

AUSTIN — It’s been six months since the lights officially went out at Oak Park Mall and most stores have moved from the property or closed.

But there’s still uncertainty regarding the future of the building.

On Oct. 4, 2014, the city announced plans to buy the mall for $3.2 million in order for Hy-Vee to build a new 60,000- to 90,000-square-foot grocery story at the site. The Hormel Foundation was to grant the city and the Austin Port Authority the money to purchase the mall site for economic development.

The main part of the mall property closed last December as negotiations continued working on the deal, forcing businesses to find new homes.

But in May, the city backed out of the deal after being unable to secure the legal agreements from Younkers and Shopko to move ahead with its plans to demolish the mall property in order to build the new Hy-Vee.

Today, the future of the site remains uncertain. Rumors of Hy-Vee still trying to secure the building for a new store are circulating, but nothing is set in stone. Hy-Vee officials have maintained they’re focus on remodeling their current building.

However, Younkers spokeswoman Christine Hojnacki said discussions between Younkers and Hy-Vee are ongoing.

“We just want to work this out and make it good for the entire community and for everyone,” Hojnacki said.

Though the city backed out of the deal, Mayor Tom Stiehm is also still optimistic about the mall property.

“I think there’s still reasons to be hopeful,” Stiehm said. “Hy-Vee is wanting to invest in Austin.”

Though Stiehm is hopeful for the future, he maintains the city isn’t currently involved in the process.

“The city is taking a step back with negotiations,” Stiehm said.

Where the businesses are now

Many of the former businesses in the mall were able to pack up their stuff and find new locations. Others, however, were not as fortunate and went out of business.

The last minute move was a lot of work for Squier, but he and his customers are satisfied with the new location. Squier had to move all of his merchandise and reorganize the store.

“It was a lot of work to get the new store ready, but people seem to like the new layout,” he said.

Though Squier is good with where he’s at now, he wasn’t pleased with the way things ended at the mall.

“The city shouldn’t have gotten involved,” Squier said. “They need to take responsibility for everybody leaving.”

Troy Williams, owner of Impact Fitness, was unhappy about being forced out as well, especially with the timing of it.

“It would’ve been nice if they had planned it a little better,” he said.

Williams and his customers were left without a gym space for three weeks.

“It was a little frustrating,” Williams said. “We could’ve hung out there for another month or two to make sure we got our [new location] up and running,”

During that time of uncertainty, Williams stayed hopeful. His family came together to put together the new gym.

“We had to see the light at the end of the tunnel,” he said.

Williams had to re-envision what he wanted the gym to be with the space he was given.

“(It was difficult) trying to take my established business and trying to start it over from nothing,” he said.

But the hard work has paid off for Williams. Since relocating, business has been booming, and Impact has almost tripled in size.

“We couldn’t be happier,” Williams said.

For both Williams and Sqiuer, they have moved on from their locations at the mall and aren’t looking back.

“There’s no way I’d go back there,” Williams said.

For Gypsy K Consignments and Enchantertainment, Albert Lea turned out to be a better fit.

“I find Albert Lea to be a bit better community in a sense,” said Katelyn Kehret, owner of Gypsy K Consignments. “They’re more for their local businesses.”

“They are very supportive of local businesses,” he said.

Gypsy K moved to Albert Lea’s Northbridge Mall. According to her, sales have picked up since the move.

Enchantertainment combined their costume closet with the Marion Ross Theatre in Albert Lea. Kaercher is now a board member at the theater and runs the costume department.

“It was the best move I could make for not only me, but my business,” he said.

Though Kehret is happy in her new location, she sympathizes for the other businesses that had to move or close their doors for good.

“It’s a sad situation that local businesses had to quit, go out of business, or move,” Kehret said.

Kaercher was sad to say goodbye to the friends he had made at the mall.

“Part of the Oak Park Mall was we were friends,” Kaercher said. “It was sad to see the stress it caused people.”

Just for Kix and Legacy Comics found new locations around Austin. Legacy Comics moved to the former Tranny Shop at 501 First Ave. NW. Just for Kix moved back to St. Olaf Church, which is where they were located before moving to the mall several years ago.

“It has been a very good partnership,” Just For Kix local director Marny Rohr said in an email.

The businesses that shut down along with the mall include: GNC, 3 Day Mattress, Party Zone Entertainment and Vision World.

Legacy Comics and Acclaim Studio of Dance, which were both forced out of the mall, could not be reached for comment.

The mall owners are behind on property taxes for lots one and 11 of the mall property, which include Younkers, CineMagic 7 and the mall building up to Shopko, which owns its site and pays its own taxes. As of last week, Oak Park Mall Ltd. Partnership owed about $335,635 in unpaid taxes from 2013 and ‘14 — about $387,120 with interest and fees.