Sprinter is All-State in 2 events 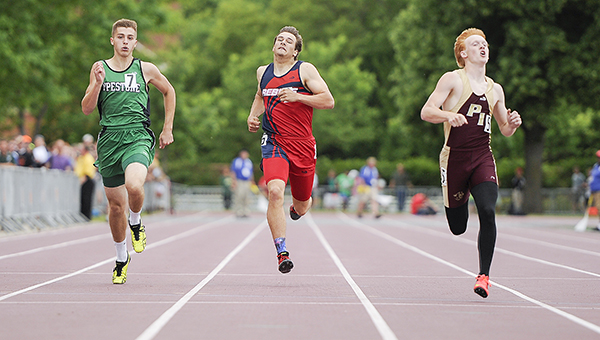 “He’s been our hardest worker all year long, and he’s had a great season,” said USC/A-C coach Kent Viesselman. “The effort was there, and everything was the way it should’ve been.”

In Friday’s preliminary race, Schuster qualified for finals with a second-place finish and a time of 49.47 seconds.

Headed into the state meet, Schuster had the fastest 400 time in Class A. He was clocked at 48.91 seconds May 30 at the Section 2A meet at Mankato West. The time was a United South Central/Alden-Conger school record, a Section 2A record and a personal best.

Schuster was one of only two athletes in Class A who ran the 400 in less than 49 seconds before the state meet.

Jonathan Webb of Minnehaha Academy entered the meet with a 48.95 seed time and repeated as the Class A state champion. He won the second heat of prelims with a time of 48.12 seconds and edged the runner-up — Pine Island’s Kyle Groven — by 0.64 seconds in the finals with a time of 48.59.

Schuster was less than half of a second out of third place.

“You take the distance, and it doesn’t take much to separate them,” Viesselman said.

Along with the outdoor 400 record, Viesselman said Schuster also set indoor school records in the 200 and 400.

On Day 1 of the state meet, Schuster took eighth in the triple jump with a leap of 42-7 3/4. The top nine finishers in each event earn All-State accolades.

Schuster also finished 12th in the 200. He took fifth place in the first heat of prelims with a time of 23.47 but didn’t qualify for finals.

The Minnesota State High School League has two classes for high school track: A and AA. Iowa and Nebraska have four classes.