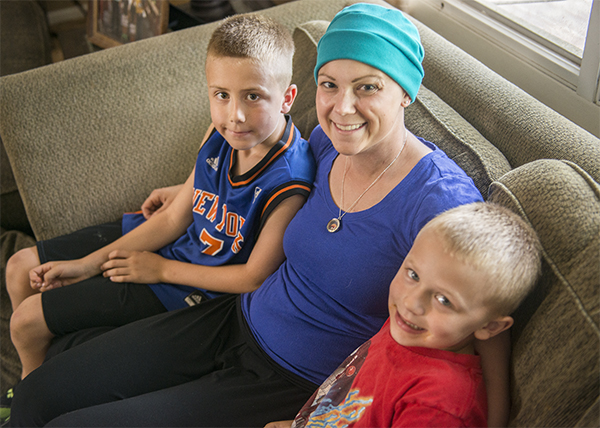 Erin Mikels, pictured with sons Trenton, left, and Jayson, right, was diagnosed with breast cancer on April 2. Mikels, 31, is currently going through chemotherapy and said she has a double mastectomy scheduled for November. — Colleen Harrison/Albert Lea Tribune

Stay positive and keep your faith.

That’s the advice Erin Mikels of Hollandale has for other people battling cancer.

Mikels, 31, was diagnosed with breast cancer on April 2. She works as an art teacher at Blue Earth Elementary School.

Mikels said in March she found a 3-inch lymph node in her armpit while one side of her chest grew unexpectedly. She went to the doctor and had a biopsy of the lymph node, which came back malignant. A biopsy was done of her breast tissue after that, and an aggressive form of breast cancer was discovered.

She started chemotherapy right away, Mikels said. She has been on chemotherapy for two months. The first drug she was on she did four rounds every other week. Now she is on her first round of a second drug, Taxol.

So far, Mikels said she is feeling well. The first set of drugs hit her hard, she said, but the new drug is lighter and she doesn’t feel like she’s on anything.

Mikels said there is no breast or ovarian cancer in her family, and none of the red flags applied for her. She isn’t even at the age where mammograms are required, she said. If it wasn’t for the swollen lymph node, Mikels said she probably never would have known.

“It was just a real big shock when we found out,” she said.

But through her journey, Mikels has found support in her family, friends and church.

Mikels said her sons have been helping around the house more. Her younger sons — Jayson, 6, and Peyton, 3 — don’t quite understand what exactly is going on but know something is wrong, she said. She called her oldest son, Trenton, 9, her “protector.”

“They’ve really taken up a lot of initiative,” she said.

Mikels also said her husband, Justin, has been getting on things that need to be done to help her out.

After Mikels’s first round of chemotherapy, she and some of her friends and family had a head shaving party. Her husband and three sons shaved their heads and for those who didn’t want to shave, they colored a strip of their hair pink.

Other friends of Mikels have started a meal train for her. Her friends can sign up for different dates on a website to bring meals to her house. Mikels said there are times when she feels like she can’t do anything, so the meal train is a big help.

Mikels said she has also found support at her church, Hope Church in Albert Lea.

As long as her chemotherapy goes well, Mikels said she will stop taking medicine in September, have a break in October and then have a double mastectomy in November.

For anyone else going through cancer, Mikels said keeping positive helps.

However, a woman she works with at Blue Earth Elementary School who had both breast and ovarian cancer and is now seven years cancer-free helped encourage her, she said.