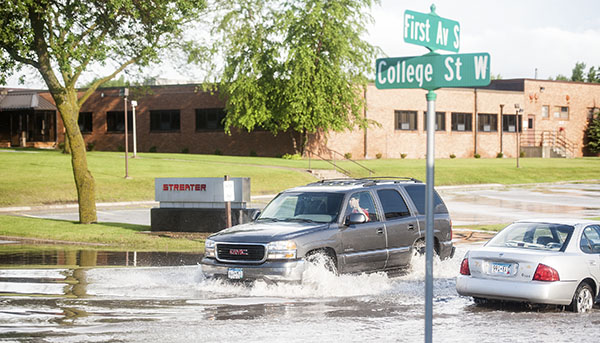 A heavy downpour in the Albert Lea area Wednesday evening caused several streets to temporarily flood and brought an end to the downtown Wind Down Wednesday festival.

Rain totals varied across Freeborn County, with Albert Lea’s wastewater treatment plant measuring nine-tenths of an inch of rain, and KIMT measuring just over an inch.

Reports given over social media sites on Wednesday evening were as high as 3 inches in some nearby cities.

A severe thunderstorm warning was first issued in northeastern Freeborn County at 3:28 p.m. The warning said wind gusts of up to 60 mph could be possible, along with quarter-size hail. The warning said hail damage was expected, along with wind damage to roofs, siding and trees. Trees were reported down near Ellendale.

The rain began in Albert Lea a little after 6 p.m.

According to reports from the Freeborn County Sheriff’s Office and Albert Lea Police Department, there was flooding on several streets.

An intersection was reported washed out at 790th Avenue and 275th Street.