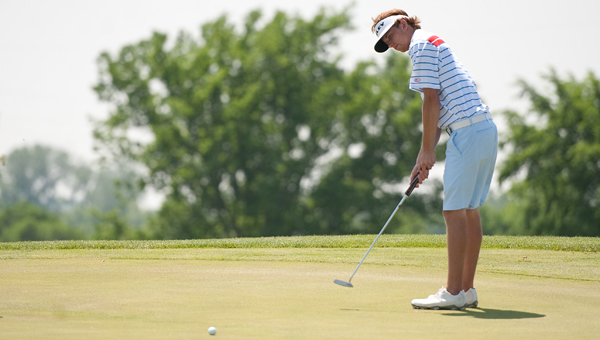 Brady Loch of Albert Lea completes the 18th hole — the last of his high school career — on Wednesday on Day 2 of the Class AA state golf meet at Ridges at Sand Creek in Jordan. — Micah Bader/Albert Lea Tribune

Alex Syverson was four strokes shy of the top 10 and led the Tigers trio with a score of 152 for 24th place, while Brady Loch took 49th with a score of 158 Wednesday on Day 2 of the Class AA state golf tournament at Ridges at Sand Creek in Jordan. 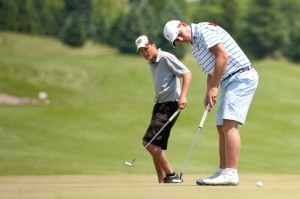 Syverson’s first three nine-hole rounds were in the 30s, and he shot a 40 on his last round.

“Alex had a good tournament,” said Albert Lea coach Casey McIntyre. “He played consistently good golf. Every shot that he hit this year helps him to be more prepared for next year.”

Loch, a senior, posted a pair of 40s after scoring a 36 and 42 on Day 1. He improved on last year’s state total by two strokes. McIntyre said Loch led the team by example.

“Brady has a very even demeanor on the course,” he said. “Other coaches have actually commented on how consistent he is.”

Loch said he will enroll at Winona State University next fall and major in marketing.

“It’s weird finishing up my career here, but hopefully I can watch these guys next year at state,” said Loch.

Syverson and Jack Pulley are juniors.

“Having two returning team members next year with state tournament experience will be a huge benefit,” McIntyre said. “

Mankato East, the team that qualified from Albert Lea’s section, tied Blake for the state title with a score of 602.

“We’ve formed a nice rivalry with East,” McIntyre said. “We’re happy for them. It’s great for our section and our conference.”

Loch was one of three seniors on the Tigers’ roster along with Dalton Flatness and Ryan Peterson.

“We are losing three great seniors from our varsity team,” McIntyre said. “They have been excellent role models for the younger players coming up. We are proud of the season we had and are looking forward to improving on it next year.”