Tuition will increase at Univ. of Minn. next year 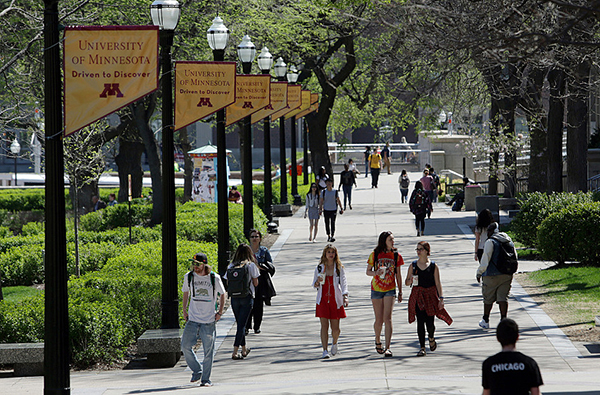 Tuition for resident undergraduates at the University of Minnesota will increase 1.5 percent next year as part of a $3.7 billion operating budget that regents approved Wednesday.

The increase puts the total cost of attending the Twin Cities campus at $22,500 a year for residents, including fees, room and board. Other campuses in the system will see increases of up to 2.2 percent.

The U wanted to avoid a 3 percent tuition hike this year, and so pushed the Legislature for another two-year tuition freeze. But it wasn’t able to win full additional funding — just $22 million of the $65 million it had asked for.

President Eric Kaler told regents he was grateful for the Legislature’s increased appropriation. But he said if lawmakers had fully funded the U’s request, state financial support for the U would be back to what it was in 2008.

“But instead, it is 9 percent below where we were a decade ago — even as we see an increase in undergraduate enrollment and graduation rates,” he said.

Next year, most graduate and professional programs will see tuition increases of up to 3.5 percent. The U will freeze tuition, however, for first-year medical students.

Out-of-state students will see a 7 percent increase next year.

Regents approved the plan after a debate over how much to increase tuition for nonresidents.

Last year, the U charged resident students about $13,500 a year in tuition in fees — among the highest rates in the Big Ten. It charged out-of-state students just under $21,000 — the lowest in the conference.

Some lawmakers say the small gap between in-state and out-of-state tuition should be greater. On Tuesday, eight Republican state representatives sent Kaler and the regents a letter outlining their concerns.

Kaler said he plans to continue increasing the gap, but he said a sudden, sharp tuition hike would hurt current students.

“I feel an obligation to our out-of-state students to signal the direction that we’re going to allow families to plan,” he said.

He said the current increase for nonresidents is the largest in 12 years.