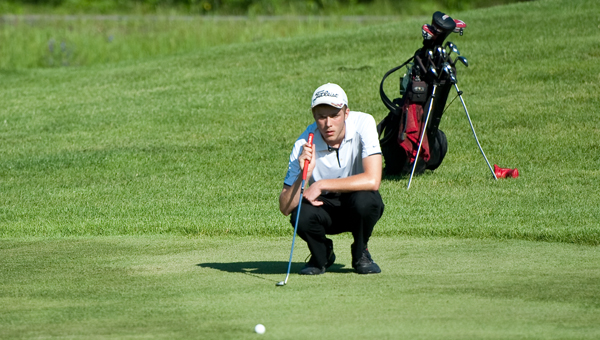 BECKER — When United South Central’s Ryan Pederson took 14th place at the state golf meet as an eighth grader, it was a sign of things to come.

Pederson produced top-10 state finishes his freshmen and sophomore seasons, and he became a state co-champion as a junior Wednesday at the Class A state golf meet at Pebble Creek Golf Club in Becker.

Only three strokes separated Pederson’s scores his first three years at state: 160, 157 and 157. This season, Pederson shaved 11 strokes from his best mark with a score of 146.

“I’ve been working on a lot of my irons and trying to hit the greens to give myself chances,” Pederson said. “I really believe if you hit the greens a lot, you’re going to score low.”

During a span of four years, Pederson has played 16 nine-hole rounds against state competition. He said experience on the course helped.

“It’s good to know how to play the ball on this course and where it will break on the greens,” he said.

Tuesday, on Day 1 of the tournament, Pederson shot a personal-best round in state competition and the best round of the meet with a 34 on the front nine. He completed the back nine with a score of 40. Pederson headed into Day 2 in sixth place and trailed the leader, Mounds Park Academy’s Brock Bliese, by four strokes.

After the front nine of Day 2, both Pederson and Bliese shot 36s. However, on the back nine, Pederson made up ground. He shot a 36, while Bliese shot a 40.

“I knew at the turn (after the front nine) that I needed to make up some strokes,” Pederson said.

With no tiebreaker, Pederson and Bliese shared the title.

According to Rebels coach Brad Huse, Pederson capped his back-nine comeback with a seven-foot putt for birdie on the last hole.

“He was scoring well on that back nine,” Huse said. “He was our number one guy the whole year, and he just got better and better as the year went on.”

Pederson said he was encouraged throughout the season by his cousin — the only senior on the Rebels’ roster — Nate Pederson, who finished in an eight-way tie for 24th place with a score of 163.

“I’m really proud of Nate,” Pederson said. “He had a great career, and I’m sad to see him go as a senior, but he’ll be back to support us next year.”

Nate Pederson was a four-time state golf qualifier. His best finish was 10th place in 2013 and his best score was 160 the same year.

At the team level, USC took sixth place out of eight teams with a score of 686.

Nick Neubauer took the Rebels’ third scoring slot and was consistent with scores of 85 on both days.

Blake Legred rounded out USC’s scoring with a 207 for 83rd place. He shot his best round with a 46 on the front nine of Day 2.