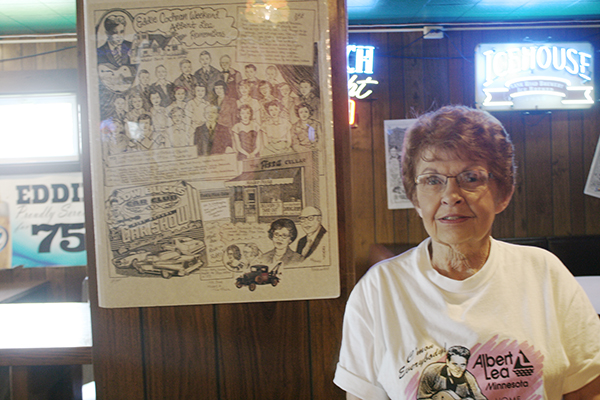 Throughout Fitzgerald’s bar, Eddie’s, she has plenty of signs and pictures up of Cochran.

Fitzgerald’s husband, Pat, bought the bar in 1970 from Eddie Dombroske. When her husband died in April 2013 Fitzgerald took over the bar and tried to keep up the spirit of Cochran.

“The name was Eddie’s when we bought it, and it just stuck,” Fitzgerald said. 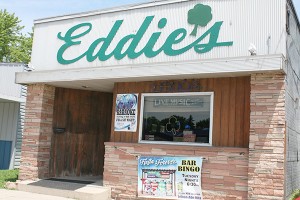 Eddie’s has been owned by the Fitzgerald family since 1970. – Madeline Funk/Albert Lea Tribune

Fitzgerald has lived in Albert Lea her whole life. She grew up hearing about Cochran, and she wanted to learn more about him.

According to Fitzgerald, the idea of Cochran flourished when one of the bartender’s brothers was married to Cochran’s sister. That generated a lot of buzz around the community, and people were interested in learning more, she said.

Fitzgerald is very protective over her signature items. She only puts them out during Eddie Cochran Weekend or during special occasions or events.

“We have karaoke and it gets a little boisterous with a lot of people and things can get taken.” Fitzgerald said.

If you want to see the Eddie Cochran pictures, signs and quotes stop in to Eddie’s Bar on Marshall Street. The bar has bingo on Tuesday nights, Texas Hold’em on Wednesday and karaoke on Friday and Saturday.