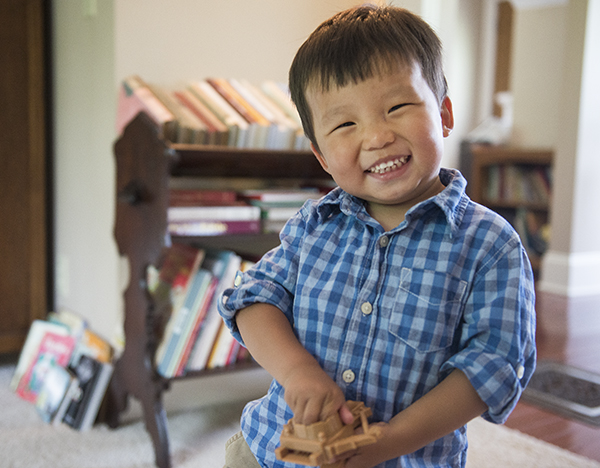 Oliver, now 3 1/2, was born in Luoyang, China. Erica and Shannon Steensma adopted him and brought him back to Albert Lea in March. – Colleen Harrison/Albert Lea Tribune

Now Shannon and Erica Steensma have added another child to their family — a little boy from China named Oliver.

The Steensmas, who have lived in the Albert Lea area their entire lives, began paperwork to adopt Oliver in December 2013. They officially became his parents on March 23.

Oliver, who is 3 1/2, was born in Luoyang, China, which has a population of about 6.5 million people.

The Steensmas have always wanted to adopt. Erica Steensma said many of her family and friends have adopted so she and Shannon planned to adopt one day, but it happened faster than expected.

“We talked about it from the beginning, but assumed we’d pursue it after biological children since many countries do not permit pregnancies during an adoption,” Erica Steensma said. “When biological children didn’t come, we knew God had a different — and better — plan for us.” 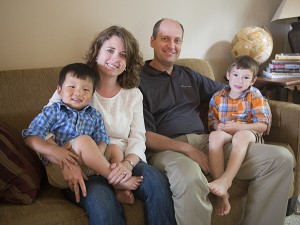 Erica and Shannon Steensma started Oliver’s adoption process in December 2013. They went over to China in March with their 5-year-old, Henry, to bring Oliver back home with them. – Colleen Harrison/Albert Lea Tribune

The Steensmas have another son, Henry, who is 5 and was born in Russia. The decision to adopt a child from China came from their good relationship with their placement agency in Texas, International Family Services, that had a faster program for adopting children from China, Shannon Steensma said.

After discussion and prayer, the Steensmas decided to travel to China for two weeks. Erica Steensma said it was an interesting but an overall good experience. Henry came along on the trip, and Erica Steensma said his jetlag took a few days to go away.

It was also a different experience for the Steensmas as the smallest city they were in had 8.5 million people.

“Traffic was nothing like Albert Lea,” Erica Steensma said.

The Steensmas had an interpreter and driver and Shannon Steensma said everything was organized and everyone involved was nice.

As for Oliver’s adjustment at home with his new brother, Henry, Erica Steensma said there were some issues at first. She said Henry had to get used to sharing his parents’ attention with someone else, but it has since smoothed out.

The Steensmas said they are thankful two women across the world decided to choose life for their boys.

“These are our children and we love them,” Erica Steensma said. “Where they were born is really immaterial.”