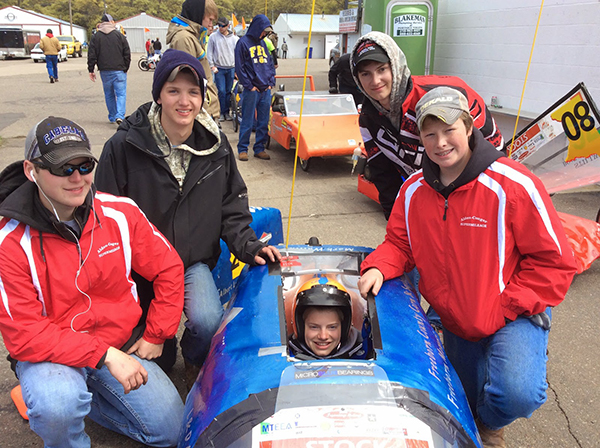 The Alden-Conger supermileage team has yet again surpassed their expectations this year.

The team has built quality cars from scratch with a goal to use less amounts of gas to go a further distance.

During the school year, the team visited Detroit and participated in the 2015 Shell Eco-marathon for the Americas. The team competed against other eligible high schools, colleges and universities from five different countries. 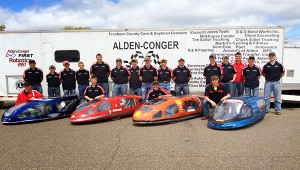 While there, they placed in five different areas. They received the 2015 Off-track Award for the best vehicle design. They earned two first places in the sections Urban Concept Alternative Fuels and Urban Concept Diesel. They also placed third in Prototype Diesel and fourth in Prototype Alternative Fuel. Altogether, the team brought back $6,500 to use toward their next supermileage cars.

After the Detroit trip, the team participated in the Minnesota Technology and Engineering Educators Association Supermileage Competition, competing against fellow Minnesotans.

When the team members weren’t competing against others, they visited North Carolina, where they were invited to take a peek at Roger Penske’s collection of cars. Penske is the owner of the auto racing Team Penske and Penske Corp., and he is known for his victories.

Also in their off time during the school year, the students built up 70 hours of work time into the cars. They worked at any time that they could which included after school, during school and on non-school days.

Bosma said that those 70 hours were just the minimum. There were some students who went over and beyond their call of duty.

To even be a part of the supermileage team, the students had to prove their worth to the team by taking written tests and scoring a certain percentage. They have also been expected to uphold good behavior and role model grades.

“It’s all these industries wanting kids to be into engineering. The future needs people to problem-solve,” Bosma said. “When there’s a problem, they gotta figure it out and they learn to work as a team. Every kid that’s graduated talks about how much they learned.” 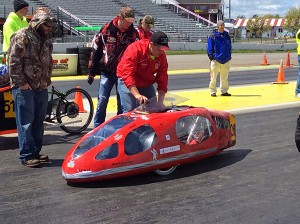 Member Josh Majerus makes sure the driver is set and ready to go at a supermileage competition. – Provided

To afford all the materials and building instruments, local sponsors from around the school district and surrounding area have helped raise money every year. This past school year, the sponsors donated around $20,000.

When summer came around, the team and its leaders spent time thinking up new ideas and they plan to keep brainstorming different plans.

“Our plan is to improve our prototypes, electric cars and just to take and improve what we’ve done,” Bosma said.