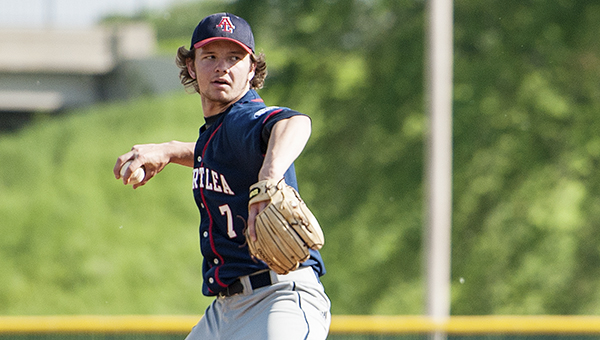 Albert Lea pitcher Chris Enderson winds up to throw a pitch on May 28 during a 12-2 win in five innings over Waseca to secure the Subsection 2AA South crown. — Micah Bader/Albert Lea Tribune

The lowest ERA and most innings pitched in the Tribune’s seven-team coverage area helped Albert Lea’s Chris Enderson make his mark on the diamond. 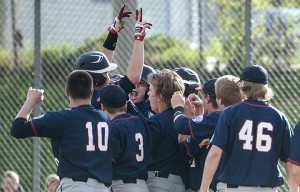 Chris Enderson of Albert Lea celebrates at home plate with his teammates after hitting a two-run walk-off home run in the bottom of the seventh inning to complete a six unanswered-run rally on May 7 against Mankato East at Hayek Field. — Micah Bader/Albert Lea Tribune

“Every time Chris went on the mound this season, we felt we had a great chance to win the game,” said Tigers coach Joe Sczublewski. “He really came on strong for our team this year as a senior and became a dominant force on the mound.”

Enderson is the Tribune’s All-Area baseball Player of the Year.

“I’d always listen to Joe (Sczublewski),” Enderson said. “Our coaches are great. They teach us what to do and when to do it.”

Andy Stockinger set Albert Lea’s school record with nine wins in 1994, and Enderson’s victory total was the most for a Tigers hurler since Aaron Klatt hit the same mark in 2011, Sczublewski said.

In addition to being the only player in the area to break the two-run ERA barrier, Enderson threw a no-hitter on May 16 during a 13-0 five-inning win at NRHEG. Of the 15 outs Albert Lea made, nine were strikeouts by Enderson.

The victory improved the Tigers’ section record to 3-0, and after a 14-6 win over Maple River on May 20, Albert Lea took the No. 1 seed in the Section 2AA South tournament.

“He was able to replicate his delivery to the plate better this season,” Sczublewski said. “This allowed him to have better balance, which helped him have better control of his pitches than he’s had in past seasons.”

Along with work in the offseason, Enderson and the rest of Albert Lea’s roster made strides by taking advantage of a rule change by the Minnesota State High School League. For the first season, players were allowed to watch video shot with an iPad in the dugout to review pitching and hitting form, Sczublewski said.

In addition to being the Tigers’ ace pitcher and starting catcher, Enderson had heroics at the plate. Although he only had nine hits on the season, one on May 7 against Mankato East was Enderson’s favorite memory from the season.

Albert Lea trailed 7-2 in the bottom of the fifth inning during Game 1 of a doubleheader at Hayek Field.

However, the Tigers rallied in the bottom of the seventh. When Enderson walked to the batter’s box, Jake Thompson was on second base, and Albert Lea trailed 7-6. That’s when Enderson crushed the ball over the left-field fence for the win.

“Chris had many excellent performances this season,” Sczublewski said. “Although, both his no-hitter and pinch-hit walk-off home run stood out.”

The Tigers qualified for the section championship for the second consecutive season, and the team posted its first winning record, 14-12, since 2012.

Next year, Enderson said he plans to continue his career on the diamond at Riverland Community College under coach Scott Koenigs. With the continuation of a strong work ethic, Sczublewski said Enderson’s best days are ahead of him.

“Riverland is a good fit for him as their baseball team is consistently a top-rated Minnesota two-year school,” Sczublewski said. “Plus, it allows him to continue helping his parents on their family farm near Hayward. I’m glad he’s going there to play ball.”