Funeral services for Andy Rhiger, 83, of Albert Lea will be at 2 p.m. Monday at First Lutheran Church in Albert Lea. The Rev. John Holt will officiate. Burial will be at Hillcrest Cemetery with military honors accorded by the American Legion and VFW.  Visitation will be from 4 to 6 p.m. Sunday at Bayview/Freeborn Funeral Home and one hour prior to the services at the church. Online condolences are welcome at  www.bayviewfuneral.com. 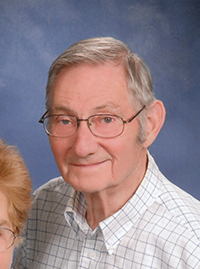 Andrew Roger Rhiger was born Oct. 31, 1931, in Hayward, the son of Holbeck and Brita (Midlang) Rhiger. He attended Albert Lea High School and during his senior year, Andy enlisted in the U.S. Army. After his discharge he returned to Albert Lea, where he worked for RELCO and then Wilson & Co., where he was a cooker and smoker.

Andy was united in marriage to Inge Bellof Jan. 2, 1954, in Giessen, Germany. Andy enjoyed fishing, traveling, bowling and making Lefse — he was known as the Lefse King. Andy was a member of First Lutheran Church, the Eagles and Sons of Norway, where he served as president, the president of the 1st District of Southern MN and president of the Degree of Honor.

Andy was preceded in death by his parents, one sister and four brothers.

Andy’s family is very thankful and appreciative of the loving care that was given to their husband, father and grandfather by the staff of Good Samaritan.