Canoe and kayak rental open to the public 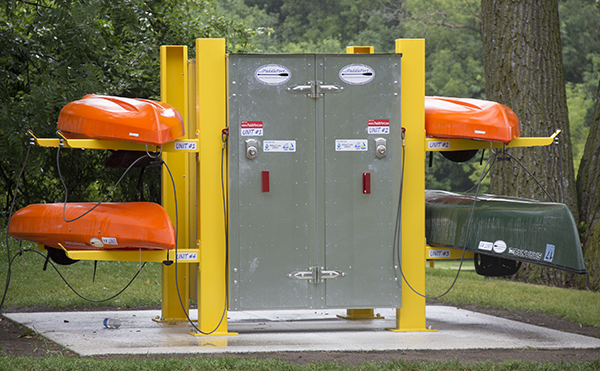 Kayaks and a canoe are now available for public rental at a station at Frank Hall Park near the Golden Point Launch on Albert Lea Lake. – Sarah Stultz/Albert Lea Tribune

Boat equipment can now be checked out online

If you have been by Frank Hall Park in the last few weeks then you’ve probably noticed a new rental station containing canoes and kayaks. Those canoes and kayaks are now available to the public for use.

Last year, Laura Lunde and her team on the Lakes Foundation won a contest called Celebrate Your Lake. They won with the completed project of Golden Point Launch, which included restoring a portion of the shoreline on Albert Lea Lake. After that was completed, they put in a soft launch point for canoes and kayaks to launch from.

After they put in the completed grading and prep work of the shoreline, they determined a need for access for canoes and kayaks for Albert Lea Lake, said Lunde, president of the Lakes Foundation.

Lunde and others researched all kinds of rentals, from self-serve to staff-monitored. After all the research, they decided that a self-serve web-based rental would be the best fit.

Whenever someone rents the vessels online, they will be sent a code to bring down to unlock the vessel and cabinet which holds the paddles as well as lifejackets and other equipment. The cost is $10 per rental per day, and you must reserve your canoe or kayak before 6 p.m. the day prior.

WIth each rental the city gets the $10 to go toward maintenance and replacement of the equipment fees.

“This makes it not likely that they’ll steal because they bought it,” Lunde said.

The overall cost of the project is not easy to pinpoint because the Lakes Foundation is a nonprofit group that gets breaks for certain purchases. The foundation also received some grants to get it started. If you were to try to replicate the development it would cost well over $15,000, according to Lunde.

“It’s one of the first of its kind.” Lunde said.

With the current success of the rental, the Lakes Foundation is looking to put in another. Lunde said they are looking into placing it either at the head of the Shell Rock River, where there is already a sand bottom or on Bancroft Bay Park.

“We’d certainly consider installing one as a gift to the city or county,” Lunde said.

The Shell Rock River, Fountain Lake and Albert Lea Lake are now a part of a state water trail designation. The trail is 25 miles long with 13 portage sites throughout the waterways.

“We’re extremely excited about the energy level of the community about such a positive project,” Lunde said.