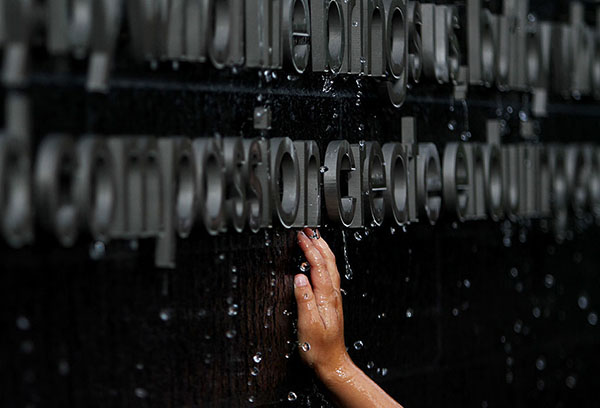 A young attendee of the 35W Bridge Remembrance Garden dedication and opening ceremony felt the waters fall over the inscribed granite wall on Aug. 1, 2011. Most of the time, the water is not running. – Jeffrey Thompson/MPR News 2011

The city of Minneapolis is planning a lawsuit against the architectural firm that designed the memorial commemorating victims of the 2007 Interstate Hwy. 35W bridge collapse in Minneapolis.

Thirteen people died and 145 were injured when the bridge collapsed during evening rush hour on Aug. 1, 2007.

The $1 million memorial and surrounding garden in downtown Minneapolis were completed in 2011 on Minneapolis Park and Recreation Board property. It was designed by the architectural firm Oslund and Associates.

But the water has been off for most of the memorial’s existence, said Minneapolis City Attorney Susan Segal.

“Unfortunately, I think it was in the second year that the memorial was open that there were issues found with the water element,” Segal said. “The water has been off at the memorial ever since, except for I think perhaps the anniversary each year.”

Segal said that when the water is running, it appears to be “continuously running instead of being recycled” and has been eroding the bluff behind the memorial.

She plans to ask the Minneapolis City Council for permission to file a lawsuit about the defects on Friday. If the council approves, a lawsuit will likely be filed within the next couple of weeks.

“We’ve been in contact with the insurance carriers for Oslund and Associates and others involved in the design and we haven’t been able to come to a successful resolution yet,” Segal said. “We now feel it’s appropriate to put the matter into litigation.”

The $900,000 memorial and remembrance garden was paid for through a settlement fund negotiated between the survivors and families of bridge collapse victims and the URS Corporation, according to the city of Minneapolis.

No one from Oslund and Associates was immediately available to respond to requests for comment.

The symbolism of a defective memorial to victims of the collapsed bridge is not lost on city officials.