City gauging interest in a splash pad on North Broadway 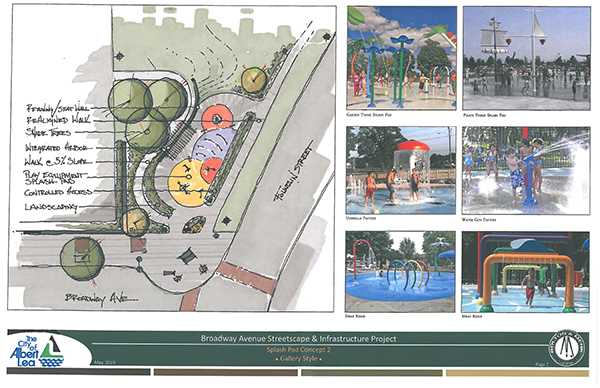 The city of Albert Lea is sketching ideas for the splash pad. – Provided

Albert Lea may potentially have a new area attraction to entertain the whole family.

City officials are gauging interest in the construction of a splash pad across from Fountain Lake Park.

A splash pad is a recreational area in which a spray pool made out of jets and sprinklers has been used to create a fun environment for people without the risk of drowning and need for lifeguards.

With many of these mini water parks popping up, the interested group has already come up with ideas. Although it is not set and stone, city staff have designed drafts and sketches of possibilities. 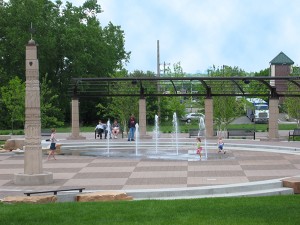 The city of Albert Lea is getting ideas from surrounding local splash pads such as this one from Nicollet’s Commons Park. -Provided

Jennifer Nelson, the office specialist at the Fire & Inspection and Planning & Zoning Office of Albert Lea, said that they want the pad to be more natural with natural and appealing stone and fountains.

Nelson advertised the idea at the Wind Down Wednesday this week, which is where the group received the inspiration to begin planning.

On Wind Down Wednesday, the Albert Lea Fire Department created their own pop-up splash pad that consisted of a raised fire hose that kids — and even adults — could run under and splash in.

Nelson said if families can enjoy the pop-up splash pad that the fire department puts up, then they can enjoy a year round built-in.

“How great on the Fourth to have something like this,” Nelson said. “Anything with water, kids love it.”

City staff promoting the project said they would like to build a pad that can be shut on and off according to the events that may take place there. They plan on families and friends using the pad for events such as barbeques, weddings or birthday parties.

“Public spaces can be considered ‘third places,’ gathering spaces outside the home and the workplace that foster broader, deeper and more creative interests,” a campaign poster said.

In May, second-graders from Sibley Elementary took a visit to Albert Lea City Hall and voted on what they, as kids, wanted to see around Albert Lea. A splash pad downtown was on their list.

“The more you build the enthusiasm, the quicker it will happen,” Nelson said.

A community survey sent out to residents also asked about interest in the idea. The city is slated to release the results next week.