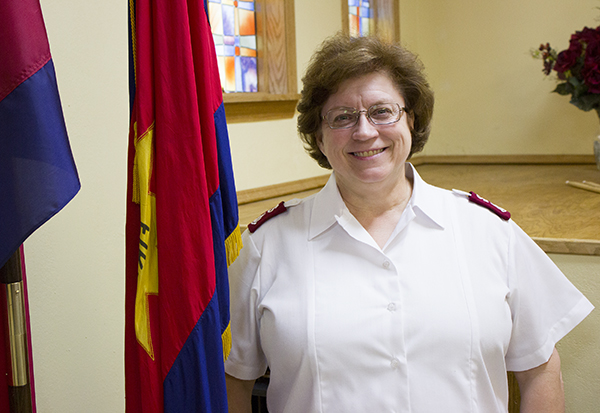 Maj. Louise Delano-Sharpe is the new commanding officer with the Albert Lea Salvation Army. She has been in town for a little over a week. – Sarah Stultz/Albert Lea Tribune

A woman with a long history in the Salvation Army has joined the leadership of the local organization as commanding officer.

Delano-Sharpe said since she was a 12-year-old girl living in Pennsylvania, she has attended the Salvation Army church and other activities affiliated with it. In 1980, she became an ordained pastor — known in the Salvation Army as an officer.

“You feel a leading by the Lord and you pursue it,” Delano-Sharpe said. “I’ve always been kind of inclined that way.”

Since becoming a pastor, she has served in various places, including New York, Costa Rica, Columbia, Venezuela and Mexico, many of those years with her husband. Overseas, she served mainly in administration and in the organization’s growth and development department.

Prior to coming to Albert Lea, she served in New York and Connecticut, working in the Salvation Army’s training college and at its territorial headquarters.

She said she asked to come to Albert Lea because she only has a few years left until she plans to retire here. Her brother, Ken Delano, lives in Albert Lea, and she is attracted to a more rural way of living.

She said cost of living is more affordable, and she needed to find good schools for her youngest daughter, Alyah, who is 12.

Her older two daughters are grown and living in other parts of the country.

Delano-Sharpe will serve with Maj. Elsie Cline, who has served locally since June 2014. They fill the shoes of Capts. Jim and Lee Brickson, who moved to Brooklyn Center earlier this year.

She said she and Cline met previously while serving together 27 years ago in Mexico. She finds it a coincidence that she and Cline are the same age and were even born in the same month. They joke that Delano-Sharpe is the older one by 11 days.

Delano-Sharpe said while she is still adjusting to the move she hopes to strengthen the programs already in place within the organization, while at the same time develop more programs.

The meal program has increased to every weekday as it was held in the past, and in the winter that may increase even further.

Interesting: Delano-Sharpe has a Gold Wing trike and enjoys hiking.