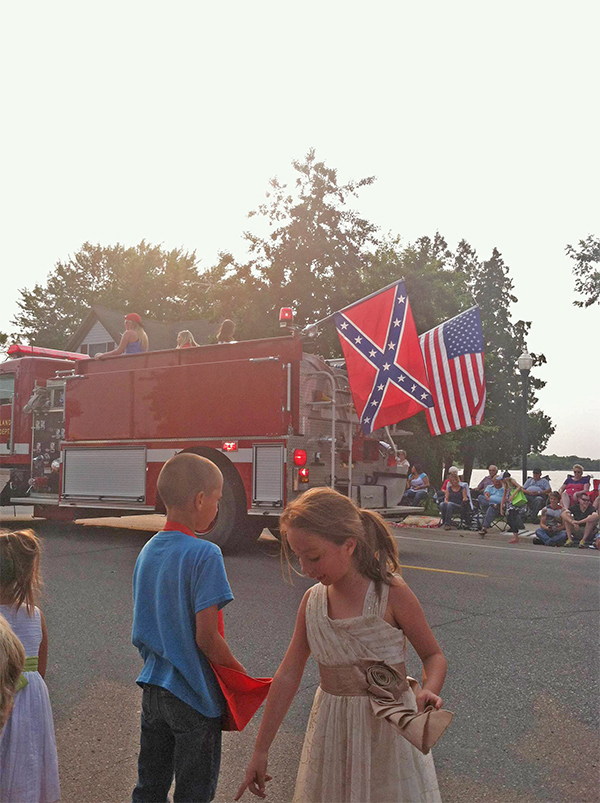 A Confederate flag was flown on the back of the Hartland Fire Department’s truck during the Third of July Parade. — Provided

A Confederate flag flown on the back of the Hartland Fire Department truck during the Third of July Parade sparked conversation in the community and on social media.

Brian Nielsen, who drove the truck with his wife, daughter, his daughter’s friend and his niece, said he has been on the department for about 10 years.

“It’s not that I’m up for the rebel or the slavery part of it, “ Nielsen said. “It’s history. They’re trying to take this flag away. They’re basically trying to change the history and abolish it and get rid of it.”

The comments come about two weeks after nine people were killed on June 17 at an African-American church in Charleston, South Carolina. Authorities said the accused gunman had posed in photographs with the Confederate battle flag.

The shooting has sparked debate across the country about the role of the Confederate flag, and the South Carolina Legislature is slated to vote about whether to remove the flag from the Statehouse grounds. Walmart has announced it is removing any items from its store and website that feature the flag.

“Even the Minnesota flag, they want to change that,” Nielsen said. “Where does it end?”

Nielsen said he wasn’t looking to get a lot of attention from his decision to fly the flag, and he didn’t think it would spur as much discussion as it has. He, himself, has a family member who is black, he said.

He had the Confederate flag on one side of the back end of the truck, while the U.S. flag was on the other.

He noted he saw two or three other Confederate flags along the parade route.

Nielsen said he talked with a few of the other firefighters on the department, and they supported him standing up for his rights. Another fire department in the county approached him as well saying they had considered doing the same thing.