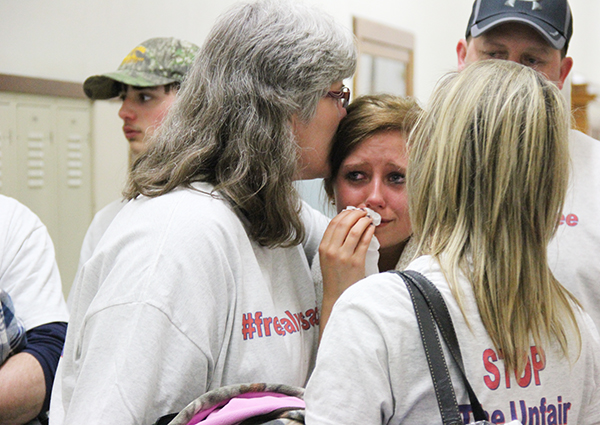 United South Central student Alyssa Drescher cries after finding out the school board decision that she would be expelled for the rest of the school year in April 2014. – Sarah Stultz/Albert Lea Tribune

Student will attend College in Mankato this fall

The Minnesota Court of Appeals on Monday overturned United South Central’s decision to expel an honor student in April 2014 for having a pocket knife in school.

The expulsion of Alyssa Drescher for the last six weeks of her junior year drew national attention.

“We conclude that each of the bases for Alyssa’s expulsion was improper,” said Judge Matthew Johnson in an unpublished opinion.

The Court of Appeals found that Drescher didn’t willfully violate the applicable school policy when she brought the knife to school. The Court of Appeals also found the evidentiary record didn’t support the school board’s finding that she willfully engaged in conduct that endangered herself or others.

School officials found the knife in a random drug search April 15, 2014. Drescher said she accidentally left the knife in her purse after a day of cutting hay bales at her boyfriend’s home a few days before.

School officials said Alyssa actually had her purse and most likely her knife for two days at the school — April 14 and 15, 2014 — but she only admitted to having it the day of the search. At the time, USC Principal Kelly Schlaak said when Alyssa remembered she had it  in her purse, she should have immediately informed a teacher. She said the school’s weapon policy has an exception for students who tell school officials if they find a knife or who tell a teacher they accidentally brought a knife to school.

The school board found that Drescher violated school policy that doesn’t allow the possession of weapons on school property. The school also argued that Drescher engaged in conduct that endangered others and herself.

Rick Drescher, Alyssa Drescher’s father, said the decision by the court was the right one.

He said the process has been tough.

“This feels like a weight being lifted off all our shoulders,” the father said.

“We didn’t have our hopes up,” he said of how the family felt leading up to the decision. “We wondered if we could beat the school district. When our attorney called us and let us know the final decision, it was very nice to hear that the truth came out.”

The expulsion will now be off Alyssa Drescher’s record, said lawyer Andrea Jepsen. The Drescher family is planning on filing a lawsuit against the school relatively soon.

Drescher graduated from USC in June. She was a post-secondary student her senior year, so she didn’t attend USC. She made the dean’s list, her father said, graduated with honors and will be attending Minnesota State University, Mankato, this fall.

“We’ve been trying to look at this as a blessing in disguise,” Rick Drescher said.

Since the incident, a Facebook page in support of Alyssa Drescher, titled “We Support Alyssa Dee,” has gathered 6,545 likes.

According to court documents, on July 10, 2014, Minnesota Commissioner of Education Brenda Cassellius issued an order in which she affirmed the finding that expulsion is appropriate, but concluded that the school board hadn’t adequately explained its reasons for the duration of her expulsion.

The Dreschers appealed to the Court of Appeals.

USC Superintendent Jerry Jensen said the school was evaluating its options and declined to comment further.