David Jon Colvin, 54, of Albert Lea, formerly of Freeborn, died Friday, June 26, 2015, at his home in Albert Lea. A memorial service is planned for Aug. 2. More details will follow closer to the memorial service. Bruss-Heitner Funeral Home of Wells is in charge of arrangements. Please see www.brussheitner.com to leave online condolences. 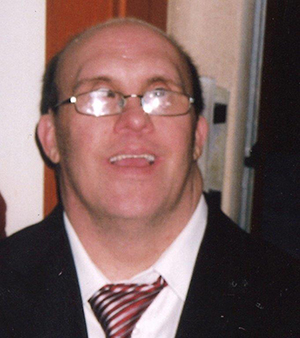 David Jon Colvin was born April 10, 1961, in Wells, the son of Cortelyou “Cordy” and Ruth A. (Shellen) Colvin. David attended school and graduated from Freeborn High School. He moved into Albert Lea and lived in the Woodvale Program and worked for Cedar Valley Services. In February of 1988 he moved to Crest Services. He loved being a part of the Special Olympics and he participated in all activities, winning medals in softball throw and bowling. He was a true Vikings fan and attended many games throughout his lifetime. He even had his picture taken with the Vikings cheerleaders. David attended many of the activities at Crest Home. He loved to dance and be with his family and friends to celebrate graduations, weddings and any other parties.  He was God’s blessing to his family. He always had a smile and a big hug for all the people he met.

David was preceded in death by his parents; sister, Peggy Colvin; sister and brother-in-law Susan (Dean) Hoven; and one brother, Bruce Colvin.