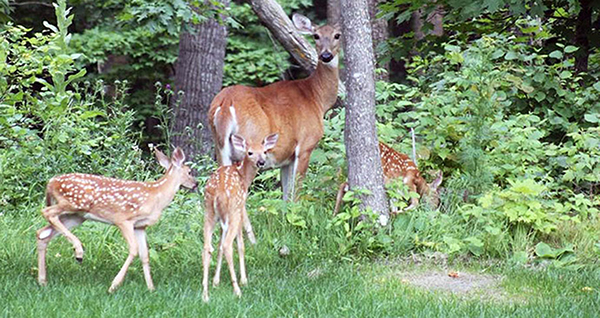 A mild winter has been beneficial to white-tailed fawn populations. – Provided

Reports of good white-tailed fawn numbers are coming in from around Minnesota as a milder winter and a conservative approach to the 2014 hunting season are already starting to show results according to a press release.

Mid-summer reports from wildlife managers around the state place the overall deer population recovery on solid footing. However, during the 2015 season, conservative population management will allow deer numbers to rebuild across much of the state. One-deer limits will apply for most hunters during this rebuilding year.

For more information about the 2015 deer season, permit area maps and links to the 2015 Minnesota Hunting and Trapping Regulations Handbook, see www.mndnr.gov/hunting/deer.

Hunters heading afield in southeastern Minnesota this fall should find plenty of deer. A mild winter and early spring have contributed to strong deer populations there.

Fawns were commonly seen in mid-May, well ahead of the usual June 1 peak fawning period. Most does seem to have twins with them this year, with some reports of triplets. Bucks that have been observed are displaying normal antler development with velvet racks of decent size on mature animals.

Opportunities abound for deer hunting in the southeast during the regular archery, two firearms and muzzleloader seasons. Once again, 300-series permit areas will be open to a special youth season over the weekend of the annual Education Minnesota conference when many students do not have school from Oct. 15 to Oct. 18.

Special firearms hunts will be offered at a handful of state parks and at Zumbro Falls Woods Scientific and Natural Area. A special archery hunt will be managed within the city of Red Wing.

Each of these hunts has special regulations and deadlines for application, as spelled out in the 2015 Hunting and Trapping Regulations Handbook.

Permit areas 346 and 349 in the extreme southeastern corner of the state will again be managed for intensive harvest, as deer populations there are above goal. Crop damage complaints in these areas have been steady this summer as deer congregate to feed on soybeans and corn stalks. An area-wide early antlerless hunt will also be offered in October.

The southwest region is seeing encouraging signs this year, as DNR staff continue to report sets of twins and some triplet fawns — and even two sets of quadruplets. These multiple fawns are a sign of a healthy herd, and back-to-back mild winters have no doubt helped.

This is a great time of year for families to view deer in southwestern Minnesota, especially does and fawns. Fawns still have spots but are active and growing. Buck deer have velvet antlers several inches long. An early morning or pre-sunset drive along a rural gravel road will increase the chance of spotting whitetails.

In spite of the good reports, three permit areas have continued to stay below deer population goal levels. As a result, areas 234, 237 and 286 will have a youth-only antlerless season in 2015. With the exception of youth, veterans’ home residents and hunters 84 years or older, all other hunters are restricted to harvest legal bucks only in these areas. The DNR took this step to bring up deer numbers in these areas because even conservative antlerless quotas the past several years have resulted in antlerless harvests too high for herd growth.