Funeral services for Dorothy Irene Christenson will be at 2 p.m. Monday at Seventh Day Adventist Church in Albert Lea. The Rev. Marshall Bowers will officiate. Interment will be at Bath Cemetery. Visitation will be one hour prior to the service at the church. Online condolences are welcome at www.bayviewfuneral.com. 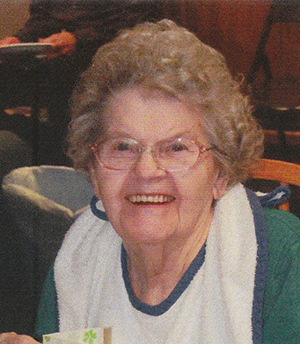 Dorothy Irene Evans was born on Dec. 16, 1923, at home in Medford to John and Eva Grace Evans. She attended first through third grade in Medford, fourth through eighth in Matawan and eighth through 10th grade in New Richland.

On Aug. 23, 1941, she married Raymond Martin Christenson of Bath in New Richland. When her daughter, Darlene, was 3 months old in February 1943, Dorothy took her baby by train to Portland/Vanport City, Oregon, where Ray was working in the Swan Island Shipyards. They all came back to Minnesota in August 1943 and lived in the home Ray built in Bath Township.

She was a housewife for many years plus, a 4-H leader, and always supported her daughters in their school activities. In 1959 she started working as a nursing assistant at Good Samaritan Society of Albert Lea for 15 years, and while there took a class and became a CMT. She retired from Good Samaritan in 1974. She worked for Senior Companion through Senior Resources of Freeborn County. She also volunteered for the Naeve Hospital Auxiliary. She had 2,637 1/2 hours of volunteer service.

She loved to crochet, knit and bake. She knit hundreds of baby caps for the newborns at Naeve Hospital in Albert Lea. They lived rural Ellendale from 1941 to 1994 and then moved to Geneva until Raymond’s death in 1996. Dorothy then moved to Albert Lea. In 2001 she married Arnold Lund; that marriage ended in December 2010.

Dorothy was a long-time member of Albert Lea Seventh-day Adventist Church. She taught in the children’s classes, was a Dorcas leader and helped wherever needed. Dorothy will be remembered by her beautiful smile. She loved everyone and everyone loved her.