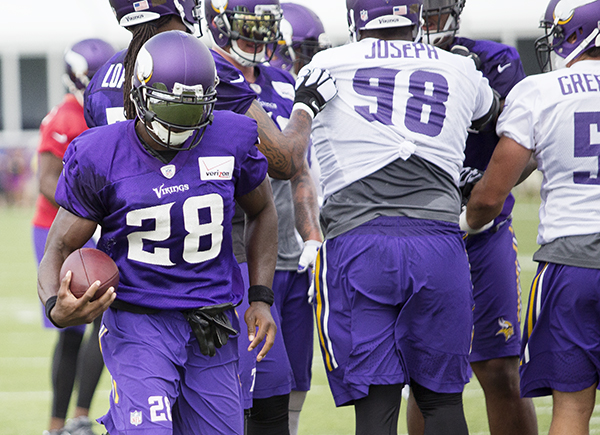 With the first week of training camp in full swing, excitement and gloom simultaneously hang over the Minnesota Vikings.

The bright spots are at the quarterback position and on defense. The cloud is in the backfield: Adrian Peterson.

Teddy Bridgewater is brimming with confidence, and the defense looks to build on massive improvements from last year.

Peterson is normally a welcome sight at running back. In 2012, he was the league MVP with 2,097 yards on 348 carries and 12 touchdowns. Minnesota’s leading rusher last year was Matt Asiata, who had 570 yards on 164 carries and nine touchdowns. The drop-off was substantial.

In the seven full seasons Peterson played, he fell short of the 1,000-yard rushing barrier only once, and that was by 30 yards in 2011.

However, how can fans cheer for Peterson? It feels like cheering for Mike Tyson the year after he bit Evander Holyfield’s ear in the boxing ring. It just doesn’t seem right.

Peterson’s crime was arguably worse than Tyson’s, even if Peterson’s felony child-abuse charges were reduced to a single charge of misdemeanor reckless assault.

The Vikings’ front office and the NFL gave Peterson a second chance. How long should fans hold this crime against him?

Winning solves a lot of things — fan popularity included — but Peterson probably won’t regain the status he once had, and that’s ok. Although he can’t change the past, Peterson can work toward being a better father and player in the future.

Being a public figure and the face of Minnesota’s franchise, Peterson has more to his job description than carrying the ball without fumbling. He’s a role model, whether he likes it or not. Kids playing pickup football games during recess imagine they’re him. Peterson failed those kids, but the game isn’t over.

Once we can cheer for Peterson off the field, we’ll start cheering for him on it. He’s taken steps to rebuild relationships with the Vikings’ organization, and that’s a good start.

We’re hoping Peterson learned from his mistake and has grown from it.