A Minnesota native known for writing one of television’s earliest situation comedies while in Albert Lea died on Friday at her home in Massachusetts.

Peg Lynch, creator and star of “Ethel and Albert,” was 98, according to the New York Times. 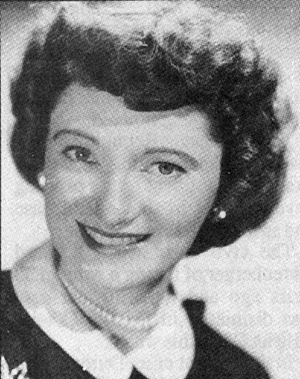 The newspaper described Lynch, who wrote nearly 11,000 scripts for radio and television, a “pioneering woman in broadcast entertainment.”

Lynch was born in Lincoln, Nebraska, and was raised in the Kasson and Rochester areas, according to a 1993 column by former Tribune columnist and writer Ed Shannon.

Lynch graduated from Rochester High School in 1933, before attending Rochester Junior College and graduating from the University of Minnesota. At the university, she wrote and acted in school plays, according to the column.

In 1938 she worked as a continuity writer at KATE Radio in Albert Lea, writing 250 spot commercial announcements a week, Lynch told an Associated Press writer in a 1953 interview. She also turned out a daily half-hour woman’s show, a weekly little theater show, a 15-minute farm news program, three 10-minute plays and two five-minute sketches a week.

“Anyone who wants to do anything in radio or TV can’t beat the training you get in a small town, where you have to learn to do everything,” she said in the interview. At that time she earned $70 a month.

In a separate interview, Lynch said she started the “Ethel and Albert” three-minute sketches a few days after arriving in Albert Lea. “Ethel and Albert” was about a young married couple named Ethel and Albert Arbuckle, who lived in a representative American town called Sandy Harbor, according to the New York Times.

She was with KATE Radio for four months and took the characters with her when she moved to other stations on the East Coast. Lynch played the role of Ethel and several men served the role of Albert. The first Albert was a KATE Radio announcer named George Russell, according to a Tribune column.

In 1944, “Ethel and Albert” became a part of the daily schedule on the ABC radio network, and in the early 1950s it became part of a 10-minute weekly segment on the popular “Kate Smith Hour.”

After her radio and television programs ended, Lynch kept busy with script writing and for other programs in the United States and overseas.