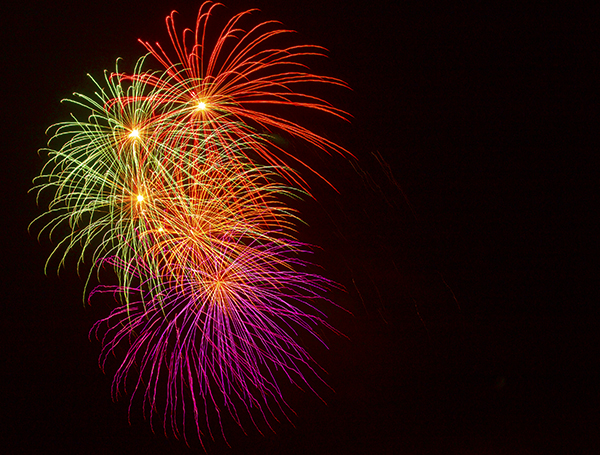 Fireworks illuminate the sky over Fountain Lake for the Fourth of July in 2014. – Colleen Harrison/Albert Lea Tribune

With July Fourth on Saturday this year, the weekend will burst with activities in Albert Lea.

The fun kicks off with the fourth annual Freedom Festival from 4 to 10 p.m. Friday at the Fountain Lake Park gazebo. The festival, hosted by the local Beyond the Yellow Ribbon group, will include food, a cash bar and entertainment by John Steiert.

The annual Third of July Parade begins at 6 p.m. To honor all of the collaborative efforts in the community, “Teaming Up America” will be the theme for this year’s parade, organized by the Albert Lea-Freeborn County Chamber of Commerce. The parade starts at the Freeborn County Fairgrounds, follows Bridge Avenue to Fountain Street and ends at Central Park. There will be 77 units in the parade, and the grand marshals are the Blue Zones Project leaders in the community.

Also on Friday, the Pelican Breeze II will have a pizza cruise on Albert Lea Lake. Call 383-7273 for reservations and more information.

On the Fourth of July, the Bayside Ski Club will present a pre-show at 1:30 p.m. and then its Superhero show at 2 p.m. at Edgewater Bay. Concessions will be available. There is no charge for the show but donations are accepted.

A patriotic concert will start at 3 p.m. at United Methodist Church. Musicians include Albert Lea Cantori, organists Eileen Nelson Ness and Meghan Meloy, The Stray Notes, Scott Ness on cello, Stuart Ness and Brent Ness on violin and others.

American Legion Post 56 will host a classic car show from 2 to 6 p.m. on Broadway and Fountain Street. Participants can compete for Mayor, American Legion and Peoples Choice trophies. There will also be door prizes given away throughout the show.

The show is a fundraiser for the Humane Society of Freeborn County. There will be music and food at the show.

While there is no carnival this year, vendors will have food and wares for sale in the parking lot at the corner of Broadway and Fountain Street.

The Pelican Breeze II will have a cruise from 6 to 7:30 p.m. on Albert Lea Lake. People may bring their own supper with water and pop for sale aboard the boat. Call 383-7273 for reservations and more information.

The Albert Lea Community Band will assemble at 8 p.m. at the gazebo at Fountain Lake Park to provide patriotic music before the fireworks.

The day will end with a bang with the fireworks display over Fountain Lake starting around 10 p.m.

The next morning, breakfast will be available at the Eagles Club from 8 a.m. to 1 p.m., serving pancakes, eggs, sausages, biscuits and gravy, juice, milk and coffee, all for $7 per person.

Northwood will have its annual Fourth of July festivities Friday through Sunday this year.

A parade will start at 11 a.m. on the Fourth followed by food, inflatables and Miss Northwood at the Worth County Fairgrounds.

There will also be a duck pond, pedal pull, bean bag tournament and horseshoe tournament at 3 p.m. The beer garden opens at 6 p.m., and there will be activities for kids at the community center at 6 p.m.. Fireworks will be at 10 p.m. at the airport.

The TUNE run and walk will be 1 p.m. Friday, and the beer garden will be open Friday night as well. From 5 to 7 p.m., there will be a pool party with music, games and food.

Cherry Gun will perform Friday and Angel Val and Rhino will perform Saturday at the beer garden this year as part of the festivities. The softball tournament will carry over from Saturday into Sunday, and will start at 9 a.m. both days.

Times and dates are subject to change, and updated schedules can be found at www.northwoodchamber.org.

Information about Bricelyn’s Fourth of July festivities can be found in a separate story online.