The world has one fewer cheerful soul with the passing of Harriet Stemsrud Yost on Sunday, June 28, 2015. Harriet passed at 94 after a brief illness in Palm Springs, California, her home for 35 years. Many people enjoyed Harriet’s sense of humor, caring and friendliness over the years. 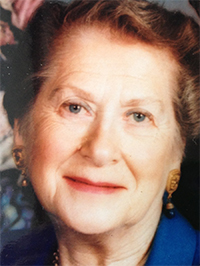 Harriet was preceded in death by her husband, Ray. They were married Oct. 3, 1942, four days before he went off to fight in World War II in north Africa. After his return Ray and Harriet lived in Albert Lea for nearly 50 years.

Harriet’s career was in retail as buyer and manager of the women’s wear department at Skinner Chamberlain Department Store, where Ray Yost was head of men’s wear. She and Ray loved dancing with the Stardusters Dance Club. The two were vital members of Christ Episcopal Church in Albert Lea until moving to Palm Springs in 1980. There they became active members of The Episcopal Church of St. Paul in the Desert where they served on the vestry and many committees. Harriet is remembered as an enthusiastic member of the choir and ECW women’s group. The pair were usually among the first to welcome and become acquainted with new members.

Harriet and Ray were active supporters and board members of Desert Society for the Blind, using their retail experience to create the society’s thrift store. Harriet was the youngest of six surviving children born to Ella and Martin Stemsrud in Madison on April 27, 1922. She was the last of her siblings to pass away. Martin Stemsrud immigrated as a child from Norway with his family.