Harry George Richter, 89, of Alden passed away on Saturday, July 18, 2015, at his home. Funeral services for Harry Richter will be at 10:30 a.m. Wednesday at Concordia Lutheran Church in Pickerel Lake. The Rev. Wendy Anderson will officiate. Visitation will be from 4 to 7 p.m. Tuesday at Bonnerup Funeral Service in Albert Lea and one hour before the service at the church. Interment will be in Concordia Lutheran Cemetery in Pickerel Lake. 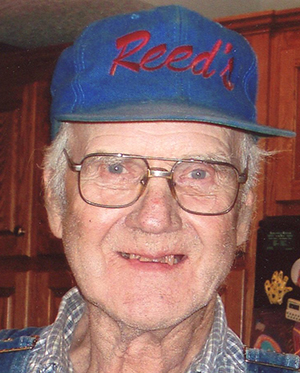 Harry was one of 12 children born to George and Ella (Brinske) Richter on Sept. 20, 1925. He lived in the same square-mile near Alden his whole life. Harry was a member at Concordia Lutheran Church in Pickerel Lake where he was baptized, confirmed and married. On Sept. 9, 1946, he married Marie Ohm.

Harry was a jack-of-all-trades and master of none. He was a farmer and handyman, working several jobs including Richter Hardware. He retired on Aug. 13, 1993. He enjoyed woodworking, fixing tractors and fixing his old cars: a 1925 model A Ford and 1941 Chevy. Harry enjoyed socializing — having coffee with “the gang” twice a day. Above all, he loved spending quality time with his grandchildren.