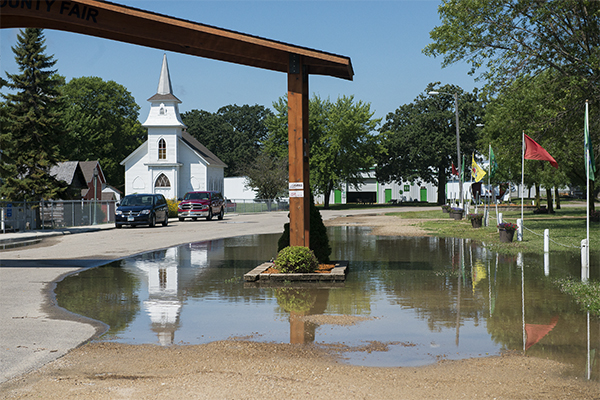 The entrance to the Freeborn County Fairgrounds flooded Friday after heavy rain earlier in the day. — Colleen Harrison/Albert Lea Tribune

Severe thunderstorms and some localized flooding hit Albert Lea and nearby cities Friday morning, dumping up to 3.95 inches of rain in some places.

For the Freeborn County Historical Museum, the downpour even caused some damage.

Pat Mulso, executive director of the museum, said the water came so fast that it caused a number of problems for the museum. The parking lot was flooded and the roof started to leak, Mulso said.

The damage was mostly to the ceiling tiles and carpeting, due to the roof leaks, but Mulso said she thinks it will be salvageable.

“The damage is in the ceiling and whether we have to take any drywall out,” she said.

In the past the museum had some issues with heavy downpours, but Mulso said this past spring and winter the museum building had no problems.

Mulso said it was easy to see water backed up on top of the museum roof due to the amount of rain in such a short amount of time, causing the rainwater to go where it normally wouldn’t.

The damage happened around 6:30 a.m., before the museum had opened for the day. Mulso said the museum was closed on Friday due to water dripping everywhere, but the museum reopened on Saturday.

Andy Lahr, a meteorologist from the National Weather Service Forecast Office in Chanhassen, said this storm wasn’t abnormal, as it is the season for severe thunderstorms.

While Freeborn County was under a warning for severe thunderstorms, a small area surrounding Geneva and Hollandale had a tornado warning, Lahr said. However, there are no confirmation or reports of any tornadoes touching down.

Lahr said there was some localized flooding in the area due to the heavy rainfall, but nothing that could be considered flash flooding. The highest rainfall in Freeborn County was 3.95 inches in Freeborn, Lahr said. Albert Lea received about 2 inches of rain, according to KIMT Weather.

The storms left the area between 8 and 9 a.m., leaving temperatures in the mid-80s and high humidity. More thunderstorms are possible on Sunday with more widespread storms on Monday, though a warning from the National Weather Service is not clear on timing or location of the storms.