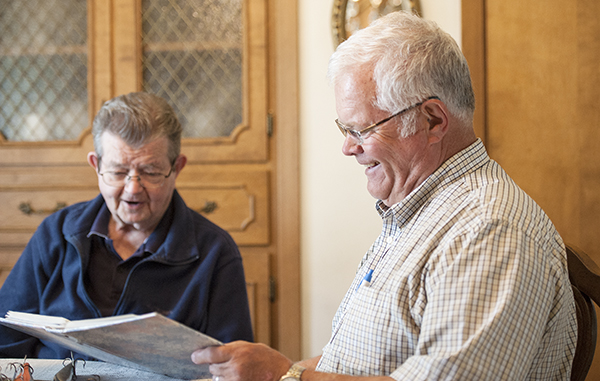 Bob Goldman, right, and Chuck Lee look through an album of fishing photos and reminisce about trips they took together. – Micah Bader/Albert Lea Tribune

While on the hunt for muskellunge, the most productive lures for two Albert Lea fishermen were homemade.

“We caught more fish with our lures than with the commercial ones, and it was fun to say we made them ourselves,” Bob Goldman said. “We bought some of those fancy lures too, but ours turned out to be a lot better at catching fish. Those other lures catch fishermen.”

Goldman moved to Albert Lea in 1968 and has been friends with Chuck Lee ever since.

to Lake of the Woods where he learned to make muskie lures, he enjoyed reminiscing.

“We’ve had some splendid trips over the years,” Lee said.

“We had a great time and caught lots of fish,” Goldman said. “It was memorable.”

The Albert Leans stayed at Angle Inn Lodge on Oak Island surrounded by Lake of the Woods.

“You could stand on the dock at the lodge and cast into Canada,” Goldman said. “That’s how far north we were.”

Goldman and Lee learned to construct muskie lures from Dan Gibbins, their guide on Lake of the Woods.

According to the Minnesota Department of Natural Resources, the largest muskie caught in the state was 56 inches long and weighed 54 pounds. To reflect the fish’s potential size and wear and tear on the lure, the body is made from butternut wood.

“It has to be butternut because it’s very hard and dense,” Lee said. “You cast that thing a thousand times, and it’ll hit rocks and bounce around.”

Goldman said they’d bring about 24 muskie lures to Lake of the Woods, and they split work in production. Goldman sought out butternut from the Cities, and Lee used a table saw and band saw to cut each lure. Lee said the angle of the front tip would make the lure act differently in the water.

“One would go down further than the others and then wiggle,” he said. “It didn’t take much of a change in shape to get the difference, and we made them all a little different.”

After the lures were cut, sanded and painted, Lee added eyelets with treble hooks.

“That’s a wicked piece of equipment,” he said about the hooks. “You’ve got to be very careful when you catch a fish with this stuff because if they jerk the wrong way, you can get a hook right through your fingers.

When the lures were completed, the friends tested them in the swimming pool at the old Albert Lea High School on Clark Street following a practice by the boys’ swimming team, Goldman said.

“What better place to see how it would work?” he asked. “We must’ve spent an hour casting, and those high school boys must’ve thought we were crazy.”

Although the lures were different colors, many had red stickers or paint on the underside.

“We got more action when we put a (spinner) on the back and and used red paint on the bottom,” Goldman said. “Our guide said the fish might think something is injured.”

The largest muskie Goldman or Lee caught was more than 40 inches long, Goldman said, but they decided not to mount them unless they were more than 50 inches.

“We’d get excited to see one follow (the lure),” he said. “It looks like a torpedo, and you see the huge mouth open up.” 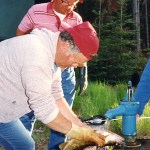 Bob Goldman, front, and Chuck Lee clean a fish during a trip. – Provided 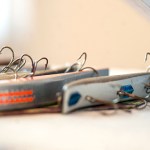 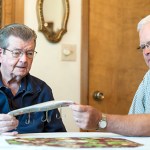 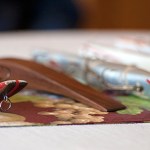 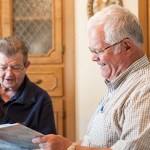 Bob Goldman, right, and Chuck Lee look through an album of fishing photos and reminisce about trips they took together. – Micah Bader/Albert Lea Tribune