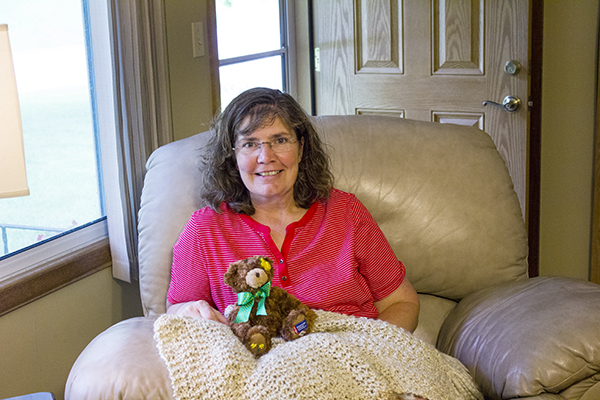 Monica Nelson received a prayer blanket from her church during her cancer treatment. “To this day it is still the blanket we fight over,” Nelson said. – Madeline Funk/Albert Lea Tribune

Cancer can be tough.

Albert Lea resident Monica Nelson can attest to that first-hand.

Nelson, now 44, was 36 when she was diagnosed with stage 4 colon cancer. Five years later, Nelson can proudly say she is cancer free. She is one of two honored survivors at this year’s Freeborn County Relay for Life. 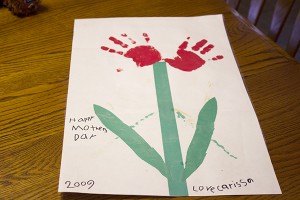 Monica Nelson’s daughter gave her this piece of art when she came out of the hospital on Mother’s Day in 2009. She had surgery in April 2009 to remove one of her ovaries and part of her liver. – Madeline Funk/Albert Lea Tribune

It wasn’t always rainbows and unicorns though. Nelson was eligible for a test drug to get rid of the cancer in her colons. During a routine PET scan, they found the cancer had moved to her liver and ovaries, which made her ineligible for the trial drug. Five out of 13 lymph nodes were also affected.

In November she had a port put in for chemotherapy. Nelson went through chemo every other week for six months.

“During chemo I tried to have a project to do to keep me busy.” Nelson said. “With a 5-year-old and a 3-year-old, I had to keep the household as normal as possible.”

“It’s a rollercoaster ride,” she said. “You have good days and bad days.”

Nelson never backed down though. During her chemo she still managed to work part time at Albert Lea’s hospital as a same-day surgery nurse.

She said working at the hospital made it easier to handle her treatment. 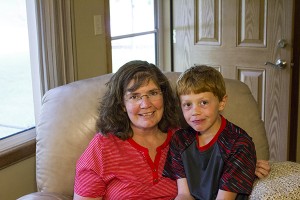 Monica Nelson sits with her son Tanner, who was three at the time of Monica’s cancer. – Madeline Funk/Albert Lea Tribune

“Working with friends helped,” Nelson said. “I also knew I had great care which made it more comfortable.”

If you happen to see Nelson while she’s working she won’t be afraid to share her story.

“I try to give them their a-ha moment and lessen their fear.” Nelson said.

During chemotherapy Nelson couldn’t eat, drink or touch anything cold without having it feel like having needles pricking her. The nausea and fatigue was the worst part for her, however. She was on 13 different medications during the process.

Throughout the process, Nelson stayed positive by receiving support from her family and community. Her grandma came and stayed to help with the children during the treatment, so her husband, Jerry, could continue working. Neighbors and church members brought dinners over and made her family feel appreciated.

“People step up when you need them to,” Nelson said.

Nelson would like to make people more aware about cancer. If you are having any issues, she suggested going see a doctor because you never know what it could be.

Nelson will share more of her story at the opening ceremony at the Relay for Life at 6 p.m. Friday. Relay for Life is at the Freeborn County Fairgrounds. For more information, call 800-227-2345 or visit relayforlife.org.