Honored survivor shares the value of support in journey 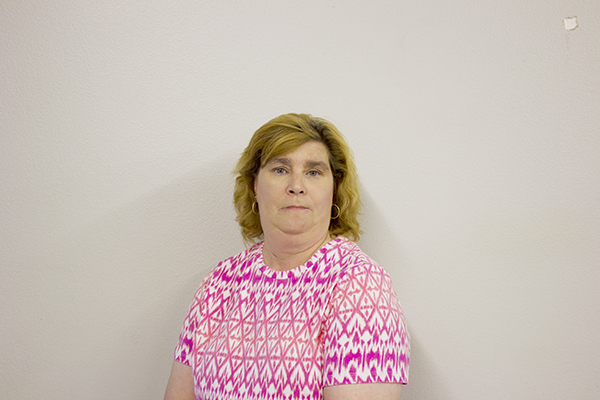 Connie Moffitt is one of two honored survivors at this years Relay For Life on July 31. – Madeline Funk/ Albert Lea Tribune

Beating cancer for many is one of life’s greatest victories.

An Albert Lea woman, diagnosed with Stage 3 breast cancer nearly four years ago, has found that the journey can be made easier with the love and support of family and friends. She is sharing her story as one of two honored cancer survivors for the 2015 Freeborn County Relay for Life.

Connie Moffitt, 49, was diagnosed with cancer on Sept. 29, 2011. Moffitt underwent surgery to remove her cancer on Oct.12, 2011. Two days later, she attended her son Travis’ football game. It was parents’ night. Travis was a senior.

“If they would have had to carry me out to that field to be with my son that night, I still would have gone,” she said.

Her cancer has been in remission for nearly four years, and there is no indication of the cancer returning. 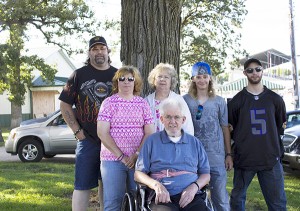 Connie Moffitt’s family supports her throughout her battle of cancer. Moffitt is one of two honorary cancer survivors at this year’s Freeborn County Relay For Life. – Madeline Funk

She has been through two doses of chemotherapy. Moffitt said chemotherapy consisted of getting treatment on a Wednesday, getting sick by the weekend, then having a solid 10 days before the next treatment. She also had 30 days of radiation treatment.

Moffitt has worked at Oak Park Place for seven years. She was out of work for eight months while recovering and now works a few days every two weeks so she can take care of her father, Fritz Moran, who suffered a stroke in 2014.

Connie Moffitt has endured other hardships since 2011. She had gallbladder surgery in March 2013 and a hysterectomy in July 2013.

Travis Moffitt, 21, said helping his mother through the journey has helped him become the man he is today.

“It was tough for me while she was bedridden,” he said. “I had to balance sports with my home life. It’s helped me become the adult I am today. I can’t be more blessed than I am today.”

Travis Moffitt said having his mother’s health improve is a return to the normalcy of life and he is thankful for that.

“She’s getting back to her normal health,” he said. “She’s not feeling as weak. She’s had complications, but is getting better.”

Her husband, Adam Moffitt, is glad her condition has improved.

“I’m glad to have my wife and life back,” he said. “Everyone who has been through this knows the struggle. Everyone who will go through it, remember that it’s important to always be there to offer support to help them get through it.”