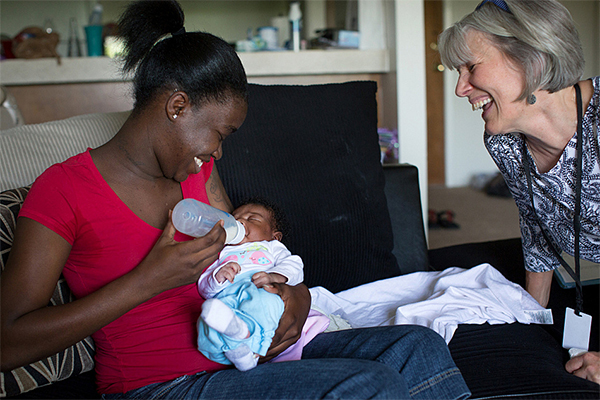 Two months ago, Burns had just finished dinner when she started experiencing labor contractions. It was way too early in her pregnancy for her to have a healthy baby.

“I was like 25 weeks,” said Burns, who is African-American. “Scary. Very scary.”

Burns, of St. Paul, was admitted to the hospital, where doctors gave her medication to stop her labor. They also gave her a steroid shot to help her baby breathe if he arrived within hours.

The contractions stopped, but doctors observed her for two days before she went home — still pregnant. She is on track for a healthy delivery in a month and receiving counseling that will help her baby reach an important milestone.

Each year, nearly 70,000 babies are born in Minnesota, but about 380 do not survive to their first birthday.

Minnesota’s infant mortality rate of five infant deaths per 1,000 births is the eighth lowest in the United States, a figure that has declined 15 percent in the last 20 years. But the state’s rate masks a stark racial gap in birth outcomes.

African-American and American Indian infants are more than twice as likely as white babies to die in their first year. Among blacks, premature birth is the leading cause of infant mortality. The racial difference remains stubbornly static despite decades of work to improve prenatal and medical care, reduce smoking rates and make baby sleep situations safer.

State health leaders said it has become clear that health disparities cannot be eliminated without addressing the social and economic inequities that make it difficult for some people to live healthy lives.

Burns, 18, doesn’t know what set off her premature labor. She doesn’t have any obvious risk factors such as obesity, diabetes or hypertension. But her pregnancy was unplanned, the baby’s father doesn’t live with her, she still has a year of high school to finish and her summer school schedule makes it difficult for her to find a job. She suspects that her worries played a role.

“It’s hard to not be stressed,” said Burns, who doesn’t know how she will afford clothes and diapers.

In the final weeks of her pregnancy, Burns is excited about the arrival of her son. She is enrolled in the Nurse-Family Partnership, a program funded by St. Paul-Ramsey County Public Health that aims to reduce infant mortality and help first-time parents give their babies a good start in life.

During a recent home visit, nurse Kristin Lau gave Burns a new portable crib so her baby has a safe place to sleep after he’s born. Lau, who will visit Burns every two weeks until the baby’s second birthday, also shares parenting tips with her client.

“We were going to talk about safe sleeping and SIDS today, right?” Lau asked.

But the effort is expensive.

Joan Brandt, a division manager at the St. Paul-Ramsey County health department, said the program costs $5,000 to $9,000 per family each year. As a result, even though 4,500 low-income women qualify for the program each year, at any one time only 300 mothers in the county receive home visits.

“I hope we’re making a little difference,” Brandt said. “You know, if we save one or two babies a year, that’s big.”

The causes of infant mortality are complex and make it a challenge to create public health responses that work for everyone.

Teen moms have some of the highest rates in the state. Typically the risk drops substantially for women who have children in their 20s and early 30s. But that’s not the case for African-American moms. Their infant mortality rates barely budge as they age.

The trend holds true even for African-American mothers who have lots of resources, said Dr. Ed Ehlinger, commissioner of the Minnesota Department of Health.

“We know that if you’re an African-American woman who’s got a Ph.D. and a good income, your baby has a higher chance of dying than a white woman who’s got a high school diploma and a lower-income job,” he said.

Researchers call the phenomenon the “weathering hypothesis.” The theory speculates that the health of black women may begin to deteriorate in early adulthood as a result of the cumulative effect of dealing with societal disadvantages such as segregation and racism.

Last year, state health officials published an unusually candid report that blamed structural racism for some of the persistent health disparities between whites and people of color in the state. Since then, Ehlinger has backed several major policy initiatives not traditionally associated with the role of a health commissioner.

Ehlinger lobbied for an increase in the state’s minimum wage and his department also published a white paper urging paid maternity and sick leave.

In March, the agency rebooted its efforts to eliminate infant mortality disparities.

Its No. 1 recommendation calls on the state to improve health equity and address the social determinants of health: the circumstances in which people are born, live and work.

“Finally we’re talking about these health issues in a way that goes beyond the health and looks at the family environment,” said Noya Woodrich, an American Indian community leader who offered input on the department’s Infant Mortality Reduction Plan. “So, I think in that regard, yay.”

Infant mortality disparities are equally high among American Indians. But their leading causes of death are SIDS and unsafe sleep environments, which account for more than 50 percent of infant deaths. For Asians, Hispanics and non-Hispanic whites, congenital anomalies are the leading cause of infant mortality.

Woodrich, president and CEO of the Greater Minneapolis Council of Churches, supports the health department’s new commitment to health equity. But she said the state likely would see faster improvement in American Indian infant mortality if it launched a sustained campaign focused on safe sleep targeted specifically to those communities.

“There just are a few things we know about infant mortality in the American Indian community and those are the things that we should be paying attention to,” she said.

Although the Minnesota Department of Health has spent approximately $5.5 million over the past 10 years on a variety of efforts to reduce infant mortality disparities, Woodrich said that’s not enough. She notes that the agency’s new infant mortality initiative doesn’t come with any additional funds.

But Woodrich isn’t relying solely on the health department to close the racial gaps in infant mortality. She said the American Indian community is becoming more aware of the problem and is leading its own response.

She’s working on an initiative that would provide Minnesota tribes with infant mortality review kits to help them conduct their own assessment of infant deaths that occur in their communities. The state conducted two such reviews in 2008 and 2013, but Woodrich said the effort needs to be more frequent.

Other community leaders are trying to revive cultural traditions as a way to help infants.

At the All My Relations Arts gallery in Minneapolis, a couple dozen women and some men are making tiny moccasins for American Indian babies born at Children’s Hospitals and Clinics of Minnesota.

Among them is Lisa Yankton, an enrolled member with the Spirit Lake tribe in North Dakota, who recently stitched blue and orange beads in a geometric pattern onto a piece of soft leather.

“When I was making it I was thinking about a boy,” she said. “So I picked the colors for a boy.”

Yankton, who lives in Brooklyn Center, has never made moccasins before. But she loved the idea of creating a pair for a new member of her community.

“When they’re born … they (will) know that their people thought of them and gave them gifts and welcomed them into the world,” she said. “Through that, we hope that the children will thrive.”

Lisa Skjefte, the American Indian community liaison at Children’s, will give families the moccasins as their baby’s first gift. Skjefte said the offering is culturally appropriate and will help build trust so parents are more open to some of the infant safety messages nurses will share with them while they’re in the hospital.

Skjefte, who organized the moccasins project, said American Indians usually are surprised to hear that many of their infants die in their sleep from preventable causes. But she said they want to know what they can do to help.

“I knew that if I started telling the community that we needed moccasins, they would show up,” Skjefte said.

Skjefte hopes the gift also will reconnect some families with their culture.

She knows it’s a lot to expect from a pair of moccasins, but said the project aims to build a healthy community.