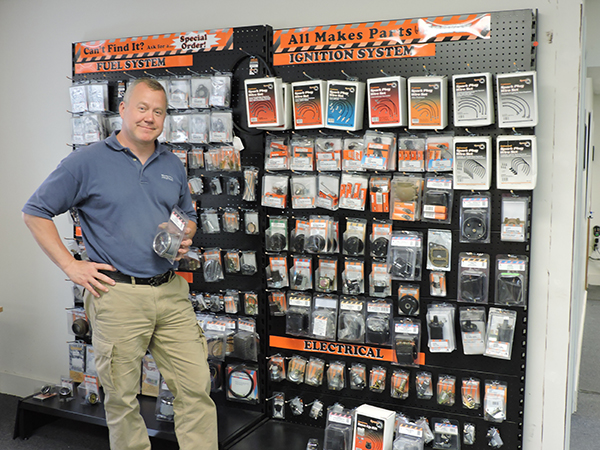 Along with offering tractor manuals, Paul Jensen has expanded his business to include a parts division. While most parts can only be bought online, he does offer more popular products in his store in Manchester. – Kelly Wassenberg/Albert Lea Tribune

MANCHESTER — A town with a population of 57 isn’t exactly what some would consider a prime location to set up shop, yet businessmen like Paul Jensen are showing that not only can it be done, one can be very successful at it.

Jensales was started with the purpose of printing tractor manuals.

“Most of the time it’s just a customer calling up and they just need a manual for their tractor,” Jensen said.

What some customers don’t realize is there is not “a” manual, there are three; a service manual, an operator’s manual and a parts manual.

“Usually they’ll buy two or three once they know the difference between the manuals,” Jensen explained.

In the last four to five years, however, Jensen said they have shifted more towards wholesale suppliers such as High Capacity and A&I Products — an aftermarket parts division of John Deere Corp.

Jensen said those companies are tracking the kind of parts they sell and ordering the manuals that relate to those parts, models and brands.

Jensales has gotten into the parts business as well. Even without heavy foot traffic through the door, the business has been able to capitalize on the growing popularity of online shopping.

“People are now getting used to and actually expecting to find their stuff online,” he said.

What gives Jensales the edge in such an arena is being able to not only cross promote their manuals, but having those manuals to use as a reference to eliminate the guesswork of what specific part is needed, which has led to them experiencing a very low return rate.

According to Jensen, his employees rarely see the parts. They handle the order and customer service, making sure the customer has the right part and offering a manual with the sale to make it easier for customers to install the part they are ordering. The vast majority of those orders are then drop-shipped.

“It’s better for us, and it’s better for the customer,” Jensen said, noting they have access to a little over 100,000 parts online.

They don’t just print manuals either. The company started making promotional shirts to sell at various events some years back. In the beginning they used a high performance iron-on, but the technique had its limitations, including an inability to be transferred onto darker fabrics. They found a solution: the direct-to-garment method.

“It’s actually more comfortable and longer wearing than regular screen printing and you can put any color you want on it; there are no limits,” Jensen said.

Whether it’s printing custom designs on T-shirts or high quality print orders like announcements or invitations, Jensen said his company can cater to customers without the hassle of large scale minimum orders and still be cost efficient.

“I’m always looking for something new or something different because you really can’t stagnate,” Jensen said about the large variety of services they offer.

He understands how essential it is to not to focus all of his businesses income streams in a direction that may run dry, which has happened before. The company used to produce “The Agricultural Yellow Pages.”

“It was something that we put together entirely,” Jensen ssaid. “We sold all the advertising, we grouped it all together and it was nationally viable. It had coupons in the back. It was a really cool book.”

Jensen said he had 15 people working on the guide. The team would sell ads for the first six months of the year and sell the manual itself for the rest of the year. That is completely gone now, and he summed up the project’s demise with one word, “Google.”