Kathryn Ann “Kati-Kat” Terhurne was born Sept. 16, 1994, in Mankato, the daughter of Brad Terhurne and Jennifer Raimann. Kati attended school in Wells, Mapleton, Mankato, Albert Lea and Waseca. She participated in a variety of sports throughout her youth. She especially enjoyed soccer and softball. On July 8, 2010, Kathryn gave birth to her daughter, IzaBelle Grace. 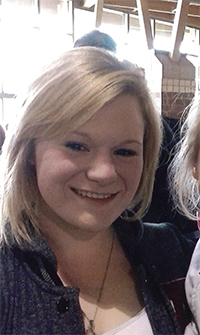 Kati’s life would seem too short to many, but those who were touched by her understood that the quality of existence far exceeds the quantity of time in which one lives. Kathryn unexpectedly passed on Friday, June 24, 2015. Kati’s family invites everyone to a celebration of life Thursday at Bruss-Heitner Funeral Home in Wells. Visitation will be from 2 to 3 p.m. with a service to follow. The family asks that those who plan on attending bring their fondest memories with them.