The funeral service for Kernel Knudson will be at 11 a.m. Wednesday at Cross of Glory Lutheran Church in Hartland. The Rev. Mark Hillmer will officiate. Interment will be in Hartland Cemetery. Visitation will be from 4 to 8 p.m. Tuesday at Bonnerup Funeral Service in Albert Lea and one hour before the service at church.

Kernel died Saturday, July 25, 2015, at Prairie Senior Cottages in Albert Lea surrounded by his family. He was 16 days shy of his 90th birthday. 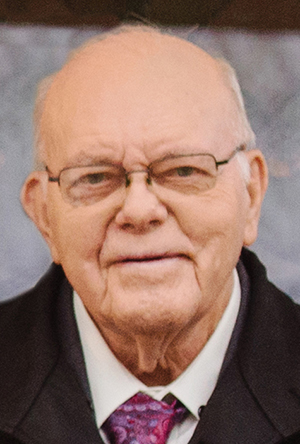 Kernel was born on Aug. 10, 1925, on the Knudson farm homesteaded by his grandfather, Kittel, to Carl and Clara (Thofson) Knudson. He attended country school and graduated salutatorian from Freeborn High School, giving up his scholarship to the University of Minnesota because of family responsibilities.

Kernel will be remembered as a patient, kind man who always thought of others before himself. His deep faith in God led him to accept duties and obligations wherever he saw a need. After the death of his father and when his mother could no longer care for her family of eight children, Kernel took over the primary care of the home and farm. With help from uncles and aunts, he was able to keep the family together and see his siblings graduate from high school — some from college — and have families of their own. He then married Elizabeth (Beth) Wakefield and was the proud father of two daughters, Kathryn and Rachel.

Kernel farmed most of his life, then worked five years at Canterbury Downs. After retirement he worked part time for Hi Yield Products in Hartland. Involvement with his church, community and county was of much importance to him. He served Cross of Glory Lutheran Church in many ways, as a Sunday school teacher, funeral usher, council member and on the building committee. He was involved in 4-H as a member and leader, in Future Farmers of America, earning the American Farmer Award, the Minnesota Star Farmer and Skelly Awards and active in Freeborn County Rural Youth. He was a board member of the Hartland town board as clerk, Freeborn County Zoning and Planning Commission, Selective Service board and Manchester-Hartland telephone board.

Kernel’s family would like to thank all of the family and friends who assisted with care during Kernel’s journey with the disease of dementia. Special thanks to the wonderful caring staff at Prairie Senior Cottages and St. Croix Hospice. Any journey is made easier by the prayers and love of those who care.