Men traveling to 50 states in less than a week 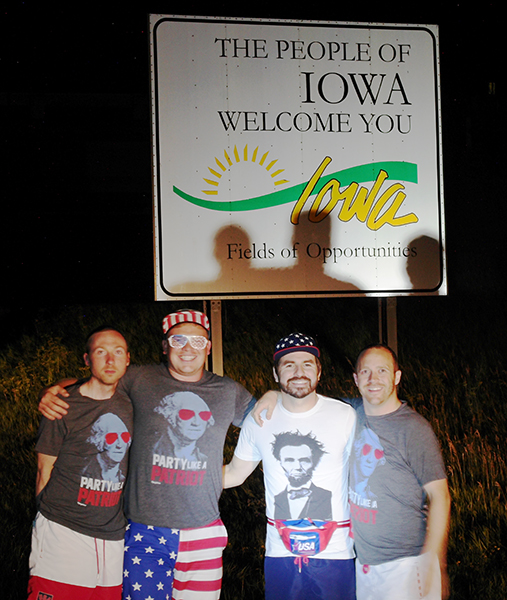 Four friends stop in Iowa during a trip to all 50 states in seven days. – Provided

Friends drive through A.L. Monday in attempt to break record

Four friends have set out to do the unthinkable: travel across all 50 states in less than a week.

Nate Williams, Chris Watson and Brian Mehrens have known each other almost their whole lives. They all grew up in Missouri and started traveling during college, which is when they brought along Josh Willis, who completes the group today, said Williams. The men have varied careers including global skatepark salesman, college marketing manager, high school soccer coach and advertising account director.

They have traveled together for the past 15 years to places including Europe, Africa, Canada and over 30 states. This year they wanted to do something no one has ever done before: go to all 50 states in less than seven days. 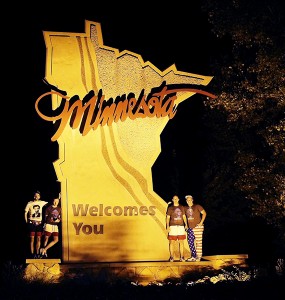 The 34th state the foursome went to was Minnesota. – Provided

“We like the challenge and feel this is the group that can do it.” Williams said.”We hope to share our experience with people, so that not only are they entertained by our stories, photos and video but that they would also be enticed to go on their own road trips and explore the great beauty of our country.”

The journey is over 7,000 miles, which consists of over 112 hours of driving. The men are also going to Alaska and Hawaii, which is 14 hours of flying.

Tipsy Elves, an American clothing design firm, is helping the guys out by providing all of their American-themed wear on the trip. Kodak also donated five cameras, including three PIXPRO 360-degree cameras, that will be attached to their vehicle to help record the journey.

Williams said they planned to drive through Albert Lea at about 8 p.m. Monday.

To show they made it to all 50 states, the foursome will stop and take a picture at the state signs.

The group started in Kittery, Maine, at midnight on Saturday. From there they began driving through all lower 48 states, ending in Washington, where they will fly to Alaska and then fly to Hawaii, where they hoped to be by Friday.

The current record for visiting all 50 states is about eight days and 20 minutes.

According to Williams about a year ago, someone posted the shortest route to drive the lower 48 states on one of their Facebook walls. It was probably intended more as a dare, Williams said, but they took it as a challenge, and have been planning for it ever since.