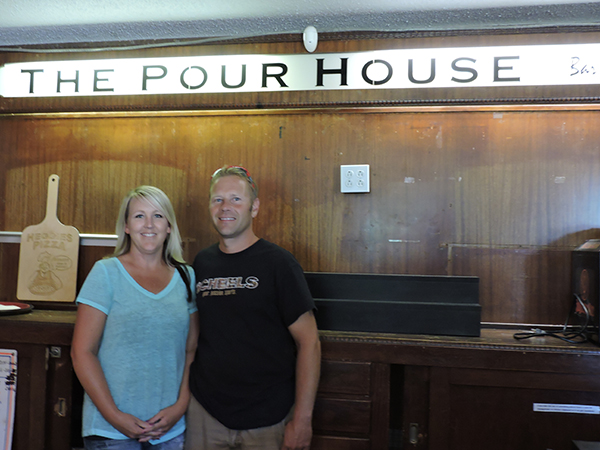 The doors of the establishment were closed by former owner Brian Lambert back in March.

“I heard a lot of people were interested in it, which was fine; I just didn’t want to see another business in Clarks Grove go down,” said Bruce Nielsen of Hartland.

After weeks of catching wind of little more than rumors and speculation, Nielsen spoke with the owner who acknowledged that interest had been expressed, but as of that time, everything had fallen through.

The response from Lambert prompted Nielsen to discuss purchasing the business with his wife, Jennie. The sale was finalized earlier this month, and the couple hopes to reopen the business in August.

When customers re-enter the bar they’ll see little has changed, except the color of paint on the walls. With the business in turnkey condition, the couple had chosen to use Lambert’s old menu as a template of where to begin.

“We got the menu from Brian and we’ll probably just go from that — especially at first,” Jennie Nielsen said, noting burger baskets, salads and wraps are just some of the items that customers can order.

The hope to expand the offerings of the facility past food and a full-service bar as well by looking into the possibility of hosting leagues, live music or other community events.

The couple is looking at a tentative opening date of Aug. 22, pending the approval of their liquor license by the state of Minnesota and the tying up of a few other loose ends. They still need to hire a few more employees and determine their exact hours of operation. For the time being, the Nielsens plan to offer both lunch and dinner Monday through Saturday.

While a few details have yet to be worked out there is one thing the couple is sure of: they are excited to start this new adventure and are appreciative of area residents who have expressed that they too are excited to see the establishment open once more.

In addition to the restaurant, the couple owns three convenience stores. The Nielsens bought the Gopher Stop in Hartland from her parents in 2000 and have since acquired two additional Gopher Stop locations in Clarks Grove and Ellendale.