Funeral services will be at 1:30 p.m. Tuesday at Salem Lutheran Church. The Rev. Melinda McCluskey will officiate. Visitation will be from 5 to 7 p.m. today at Mittelstadt Funeral Home, 902 E. Main St. in Lake Mills, and again one hour prior at the church. Burial will take place at North Prairie Cemetery in rural Leland, Iowa. 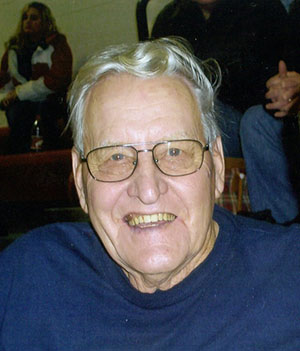 Reuben attended country schools in Winnebago County and was a member of the 1946 graduating class of Lake Mills High School. On July 4, 1948, Reuben married Eleanor Swenson at Immanuel Lutheran Church in Scarville, Iowa. They moved to their farm northwest of Lake Mills where they resided for nearly 60 years. Together they raised seven children, farmed 160 acres of land, milked cows and raised pigs.

In the early ’80s Reuben began traveling throughout Iowa, Minnesota, South Dakota and North Dakota, working for Farm Bureau Insurance as a crop adjuster. Reuben developed many new friendships during these travels — not only farmers — but other adjusters and Farm Bureau agents. Reuben also worked with the Agricultural Stabilization and Conservation Service office measuring grain bins.

Reuben enjoyed many years of singing barbershop with North Iowa Barbershop Chorus. He was a member of Countrymen Quartet. Reuben served on the Lake Mills Community School Board, Lake Mills Elevator Board and County Agricultural Stabilization and Conservation Service Board. Throughout the years Reuben enjoyed attending the many activities of his children and later his grandchildren. He could be found in the bleachers at their football, basketball, volleyball and baseball games, wrestling meets and car races. He attended many music and band concerts. Reuben enjoyed hand carving many different characters and sharing them with his family and friends.

Following Eleanor’s death in 2008, Reuben left the farm and moved to Mills Harbour in Lake Mills. In May of 2011 he married Delores Brunsvold and made their home at Mills Harbour. Due to health reasons, Reuben and Delores moved into Lake Mills Care Center.

Reuben was preceded in death by his parents; wife, Eleanor; brothers Carl and Floyd; sisters Geneva, Alvera and Helen; and his granddaughter, Stephanie Hanna.

Online condolences may be left at www.mittlestadtfuneralhome.com.