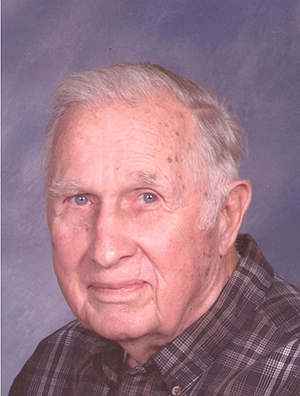 He was born on March 12, 1926, to William and Charlotte(Jacobson) Lundquist in Duluth.

Dick grew up in West Duluth and graduated from Denfeld in 1944. After high school he served in the United States Navy from 1944 to 1946, serving on the submarine, USS Cabezon. Dick married his high school sweetheart, Betty Olson, and they were happily married for 66 years.

He was a 1950 graduate of University of Minnesota in Duluth and later in life he earned his master’s degree. After excelling in high school and college athletics, he went on to enjoy a teaching and coaching career in Freeborn for five years and in Mt. Iron until retirement in 1983.

Dick enjoyed hunting, fishing, traveling and operating Cedars Resort with his family in Northome, where many cherished memories were made.

In his retirement years, Dick and Betty returned to Duluth to enjoy Lake Superior life.

Dick was preceded in death by his parents William and Charlotte; and son-in-law, Cliff Meyer.

The family would like to extend a special thank you to the staff at Bayshore Health Care Center and St. Luke’s Hospital.