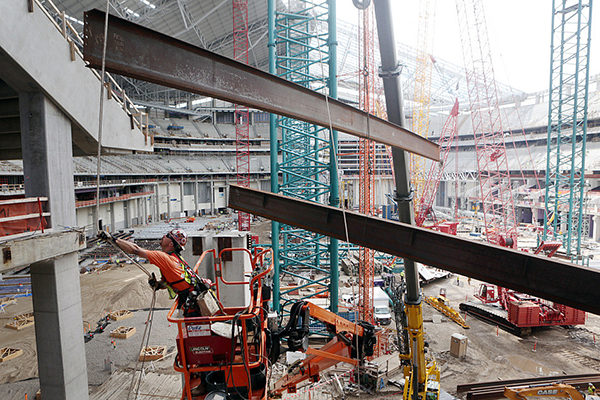 The new Minnesota Vikings stadium still has a dirt floor and open sky. A little more than a year from now, though, the team will take the field at its new $1 billion home.

The work is nearly two-thirds done. Crews are on track to finish the downtown Minneapolis stadium for an August 2016 kickoff, although as officials led reporters on a tour of the site Monday, it was still a little hard to imagine. Getting the building weathertight for the winter is a priority.

“It’s all about the roof,” said Dave Mansell, project superintendent with Mortenson Construction. “Get the roof done, get the enclosure done, prepare ourselves for the winter that’s not very far away, unfortunately, and then work through the winter finishing.”

The concrete is almost done. Window glass already runs from the roof to the ground in places. Workers are framing in concession stands and installing the ductwork for heat and air conditioning.

Next month the 65,000 seats will start to arrive. By Aug. 10, workers will be installing a chair every two minutes, Mansell said.

In December, installation starts on a lot of the technology, scoreboards and ribbon boards. By January, all the scoreboards will be complete.

“The playing field turf will start in the month of May, and in July, we’ll be done just in time for the kickoff of the 2016 season,” said Eric Grenz, a construction manager.

A few unknowns remain. The Vikings have put nearly $100 million in amenities into the project so far, from “graffiti-resistant” toilet stalls, to extra escalators and more than 1,200 TVs. There may be more additions as the project heads into the final lap of construction, said team spokesman Lester Bagley.

Although the stadium will host the 2018 Super Bowl and the 2019 Final Four, the Minnesota Sports Facilities Authority is bidding for one more big event — college football’s playoff championship game in 2020. The playoff organizers in October are expected to pick among nine bidders to host the games in 2018, 2019 and 2020.

Outside the chain link of the stadium building site, downtown Minneapolis is a hive of construction activity.

Two massive towers are rising to the west of the stadium. They are the new $400 million offices of Wells Fargo Bank in the Downtown East district. The first tower is expected to open in December, the other in February.

Minnesota Sports Facilities Authority Chair Michele Kelm-Helgen said there’s even more than that going on around the area, centered on the new park space between the Vikings stadium and the Hennepin County jail. Her office says the stadium has sparked nearby development approaching $1 billion in value so far, nearly matching the stadium’s price tag.