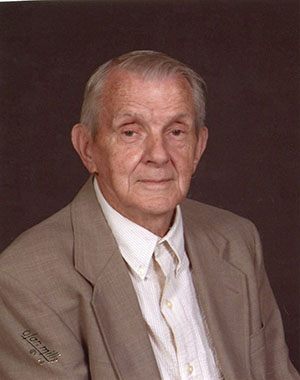 Simon Allen Lee was born May 22, 1930, in Albert Lea, to Simon and Ellen (Christensen) Lee. Simon was a member of First Lutheran Church, where he served as an usher for many years. He served in the Navy in Norfolk, Virginia, from 1948 to 1949. On Aug. 15, 1952, he and Arlene Hengesteg were married in Sioux Falls, South Dakota.

He worked for Wilson & Co. and Farmstead for over 42 years, retiring in 1990 when they closed. He golfed on several league teams while working. After retirement he golfed Mondays and Fridays with the seniors. When he retired, he and his wife started walking over three miles per day. They enjoyed watching great-grandchildren play hockey and baseball. Simon and Arlene traveled to Branson, Missouri, and saw several shows, visited a mall and Silver Dollar City, and had breakfast on a riverboat.

Simon liked to watch westerns and listen to country music. Wintertime was Simon’s puzzle time. He was a member of the Eagles Club.