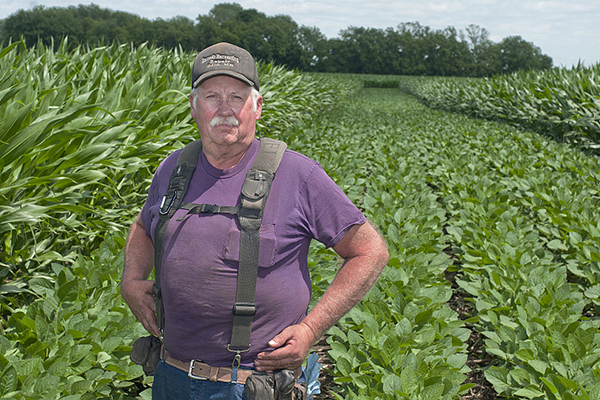 Duane Ommodt said that he’s happy with the timely rains so far this year. Ommodt plants his corn in alternating strips with soybeans to increase the corn’s exposure to sunlight. – Jackson Forderer for MPR News

Although Minnesota’s cornfields look great, conditions are uneven and prices are low.

In some areas, strong winds have blown down cornstalks, heavy rains have flooded fields and hail has shredded plants. Even so, in most parts of the state, cornfields are a healthy dark green, holding the promise of big harvests.

One corn farmer who thinks his outlook is good is Duane Ommodt in southern Minnesota. He rated his crop as “almost unbelievable, really.”

“Overall, I’m real satisfied with the spring we’ve had so far, and summer here,” he said.

Only 10 miles away, torrential rains flooded some fields. And it’s been even worse in other parts of the United States, especially in a band from Missouri to Ohio.

Kent Thiesse, vice president of MinnStar Bank in Lake Crystal, in southern Minnesota, said corn prices have risen almost 20 percent over the past month. But even with the increase, prices are still poor. For most farmers it still costs more to grow the crop than they can sell it for at current market levels.

Ommodt, who farms in St. James, was blunt: “If you’re going to make anything at all, it’s going to be almost a miracle.”