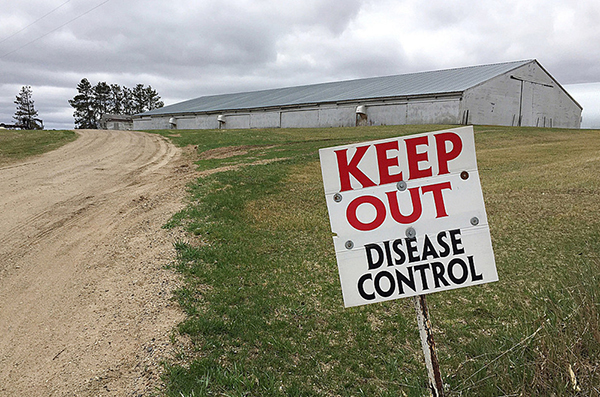 This April 20, 2015, photo shows a sign warning visitors to stay away outside a turkey farm near a Jennie-O Foods turkey processing plant in Melrose. — Kirsti Marohn/The St. Cloud Times via AP

The economic toll of avian flu on Minnesota’s poultry industry has climbed to nearly $650 million, according to new data from University of Minnesota Extension.

That is nearly double the estimate in May, when the disease was midway through its march through the state.

Minnesota farmers have lost more than 9 million chickens and turkeys to avian flu, and the total estimated cost is nearing the $870 million value of turkey sales last year.

Bird flu has mysteriously infected flocks at more than 100 Minnesota farms, from the Iowa border nearly to Canada. The state’s main poultry production zone in central Minnesota has been hit the hardest. In Kandiyohi County, the state’s leading turkey producer, the virus devastated about three dozen farms.

The university’s damage estimate includes about $250 million in direct losses to farmers.

“This has affected about a third of chickens that are laying eggs,” Tuck said, “and then (led to) about a 12-percent decrease in the number of turkeys.”

The disease also caused major losses in the poultry processing industry. The Jennie-O turkey plant in Faribault laid off more than 200 workers. Tuck said about 2,500 jobs across the state have been affected by the flu outbreak and the total loss of labor income from avian flu is more than $170 million.

The effect of the virus appears to be showing up in the state’s employment statistics.

Although it’s not possible to isolate bird flu job losses in the numbers, the number of people employed in animal slaughtering has decreased slightly compared to a year ago, said Steve Hine, Minnesota’s chief labor market analyst.

“It was down at a time where we’re usually seeing increases,” Hine said. “So it is certainly the case that it is much weaker then we’re used to seeing.”

Farms hit with avian flu sustain two economic blows. First, they lose much of their investment in the flock, although the federal government reimburses farmers for birds that are killed to prevent the virus from spreading. The second blow comes from the weeks that have to pass before farms can restart production with new birds.

Dead birds typically are composted, a process that takes about a month. Over a couple more months, the barns and buildings must be cleaned, disinfected and certified as virus-free.

So far, only about a third of the affected farms have been cleared to resume production. When all the losses are added up, the state’s poultry farms struck by bird flu are taking a major financial hit, said Steve Olson, executive director of the Minnesota Turkey Growers Association.

“It’s roughly about a third of their income at least that they’re going to be losing this year,” Olson said.

Still, so far all of the infected farms plan to stay in business and refill their barns with turkeys or chickens, Olson said.

“(There’s) definitely a much better mood because we have not had an introduction in Minnesota since June 5,” he said.

The summer lull may only be a temporary respite. State and federal health officials are predicting influenza could return in the fall when wild ducks and geese head south. Researchers think they carry the virus and deposit it in the environment in their droppings.

But epidemiologists still have yet to confirm how the virus spread in this year’s outbreaks.

Researchers will make a wide ranging effort this summer to test waterfowl for the virus to try to determine how many birds carry the disease.

Tests of more than 3,000 samples of waterfowl droppings this spring in Minnesota found not a single instance of the virus.