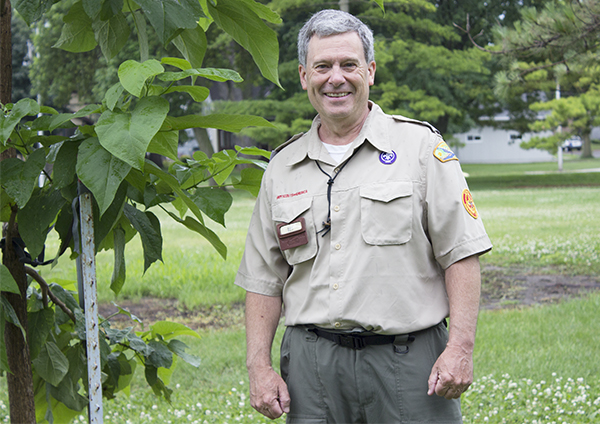 Nelson, an Albert Lea resident, said he appreciates being able to help change the lives of young people.

“What we do makes a difference,” Nelson said. “The Boy Scouts give youth an opportunity to make a difference. This program allows kids to have positive role models. It can also help youth from a different country adapt to the culture of the United States.”

As a senior district executive, Nelson is responsible for developing and maintaining relationships with community-based organizations and meeting with businesses, residents and community leaders to get them involved with the program. Nelson is also responsible for selecting and training Scout leaders in the district area.

Nelson has taken a wide path in his career with the Boy Scouts, initially heading east then back to the Midwest.

He started his career with the Boy Scouts in a council out of Wheaton, Illinois, as a district executive. Nelson worked there for approximately three years. From there, he went east and worked out of a council based in Forrest Hills, Pennsylvania, for about three years. From there he went to Norwalk, Connecticut, and served seven communities in the Danbury area, including the Sandy Hook School District, from 1987 to 1990. Nelson then worked for Boy Scouts councils in Indiana and Illinois before returning to Minnesota in 1999.

“He carries his business card and shakes hands,” said Dick Paul, retired Scout executive. “He is personable and outgoing and interested in Albert Lea. He is very enthusiastic, yet very mature.

“He is very experienced and dedicated to Scouting. He seems to know what he’s doing and is very interested in trying to build the organization.”

Nelson has a daughter, Kristin, 28, in the Pittsburgh area, a step-daughter, Jessica Estrada, 28, and a stepson, Blake Estrada, in his mid-20s, who both live in the Sacramento area.

“We focus on youth development,” Nelson said. “We want to provide youth with positive role models so they can become a positive citizen when they become adults.”

Nelson was a Cub Scout when he was 8 years old. He grew up in Clinton, Iowa, and attended Iowa State University.

Nelson earned a degree in leisure services, specifically in the outdoor recreation area, and figured working with the Boy Scouts program would complement his degree. The job also gave Nelson a chance to work with youth and parents, an opportunity he relished.

“I want to build upon the Scouting program that’s there for youth outreach,” Nelson said.“Every day’s different in the Boy Scouts. That’s great. You meet some fantastic people. One hour you may be talking to a top executive; the next hour you could be talking to a priest or someone at a church.”

He said being in the Boy Scouts has given him better leadership and people skills.

He enjoys fishing and hunting in his spare time.

The Twin Valley Council is divided into four districts based on geographic area. These districts help support units and provide Scouting programs to youth.

Communities covered in the Twin Valley Council include Mankato, Albert Lea, Blue Earth and New Ulm, among many other communities in southern Minnesota.