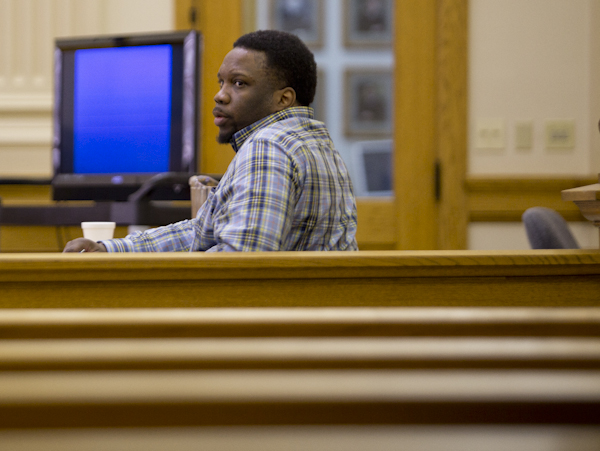 Rows of seats sit empty behind Tyrone Washington Jr. during closing arguments in his trial Monday in Fort Dodge, Iowa. On Tuesday, Washington was convicted of first-degree murder in the 2013 stabbing death of ex-girlfriend Justina Smith in Northwood. – Colleen Harrison/Albert Lea Tribune

The jury deliberated for approximately eight hours Monday and Tuesday before delivering the verdict. The trial began last week.

Jeanette Hanson, Smith’s mother,  was relieved by the verdict.

“Justice has been served for my daughter,” Hanson said. “It has taken such a long time. It doesn’t bring my daughter back, but I want to thank those involved with helping achieve justice. Hopefully we can start to heal.”

Sentencing is scheduled for 1:30 p.m. Aug. 31 at  Worth County Courthouse. Washington, of Northwood, faces a mandatory sentence of life in prison with no chance of parole.

His lawyer, Charles Kenville, said an appeal of the decision is likely. Kenville argued his 41-year-old client was acting in self-defense when he stabbed Smith, 30, also of Northwood, 12 times in Swensrud Park in Northwood.

“We accept the decision of the jury, but obviously we’re disappointed,” Kenville said.

He said he respected the trial process.

“The family of Justina Smith feels that justice has finally been served in this case,” a written statement from the family of Smith said. “Justice for Justina. We would like to thank Assistant Iowa Attorney Generals Laura Roan and Tyler Smith for all their work on this case, the jury for their consideration, and our family, friends, co-workers and community for their support, and a special thanks to Miranda Stearns from Crisis Intervention Service for all she has done for us.”

The decision came after closing arguments on Monday. Earlier in the trial, the jury heard testimony from Washington, as well as Tyrone Jones, who was with Smith the day she was killed. However, Kenville noted discrepancies between Jones’s testimony and his deposition.

“He plunged the knife into her,” Roan said of Washington during closing arguments. “He fled at a high rate of speed toward his home state of Illinois. She was brutally attacked by the defendant with the specific intent to kill.”

Washington fled the scene of the crime in Smith’s 2003 Pontiac Grand Prix and led police on a high-speed chase, reaching speeds up to 110 mph, until he was arrested in Scott County, Iowa. Kenville argued Washington fled police because he was afraid they wouldn’t listen to him.

“This case has been built by the state through the shifting sands of assumption,” Kenville said.

He said the state was practicing confirmation bias by confirming evidence they wanted to be true. He said Washington was looked at as having bad character by law enforcement stemming from his domestic assault arrest on July 6, 2013, and his arrest for violating a no-contact order on Aug. 1, 2013.

“As a jury, you have to base your decision on evidence and facts,” Kenville said.

The trial was held at the Webster County Courthouse in Fort Dodge. The trial was originally scheduled to be held in Worth County, but was moved due to the lack of African-Americans in the county. Of the 112 jurors that showed up for the original jury selection, 111 identified themselves as white and one identified as Native American. Washington is African-American.