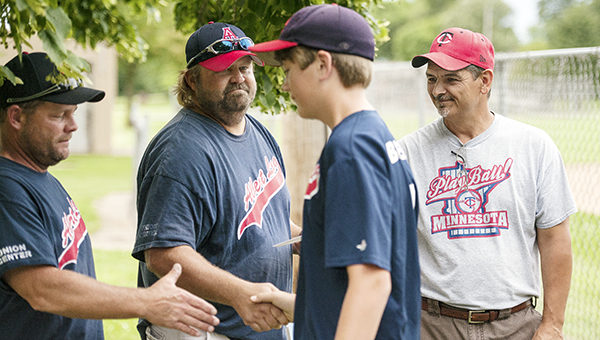 Success was measured in multiple ways for the Albert Lea 13AA baseball team.

Along with qualifying for the Minnesota Sports Federation state tournament and posting a 15-4 record, Albert Lea was recognized for outstanding sportsmanship. 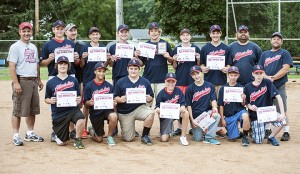 The team received the Real Winning Team Award Tuesday at the baseball field in Hayward.

“It was a great season with a great group of kids who love to play baseball,” said Albert Lea coach Bryan Tlamka.

The award was presented by the Owatonna Huskies Bullpen Club in partnership with Youth 1st, the city of Owatonna and the Minnesota Twins Community Fund.

“How you play the game, your effort, your attitude and your conduct on the field is much more important than whether you win on the scoreboard,” said Youth 1st president and founder Mark Arjes. “If you play with those things, winning will take care of itself.”

Conduct by players, coaches, parents and fans was criteria for the honor that was judged by umpires at a tournament at Owatonna.

Tlamka said his players worked to bounce back quickly from mistakes.

“The big thing was getting it to roll off their backs, so if they make a mistake they’re not coming in the dugout with their heads down, throwing their gloves,” he said. “Good sportsmanship helps them get back in the game.”

Albert Lea won its league tournament on July 18 at Mapleton, and the team went undefeated in league play for the second consecutive season after the group went unblemished in the league as 12-year-olds, Tlamka said.

A strength for Albert Lea was a pitching rotation with seven hurlers.

“For a couple of guys, it was their first time getting in there, but they did a good job,” said Dean Dahlum, who coached the team with Tlamka and Al Casterton. “It worked out well.”

Although Albert Lea qualified for the MSF state tournament by winning its five-team league with an 8-0 victory on July 18 over Waseca at Mapleton, a paperwork error prevented the team from advancing, Tlamka said.

In addition to a plaque and certificates, the team was presented with tickets to a Minnesota Twins baseball game.