A.L. volleyball team led by new coach with much experience 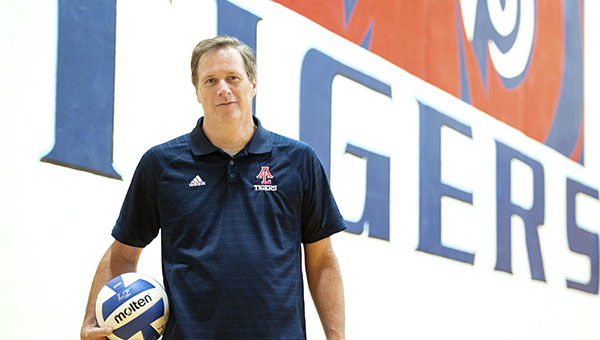 Albert Lea volleyball coach Jamie Cameron stands on the court on Aug. 3 at Albert Lea High School. Along with coaching, Cameron is a pastor and a paintball, motorcycle and all-terrain vehicle enthusiast. – Micah Bader/Albert Lea Tribune

Sharing time between the pulpit and the sideline is nothing new for Jamie Cameron.

“Something that I love about the church is they’re very supportive of work in the community, whether it’s Clarks Grove or Albert Lea,” Cameron said. “They said, ‘We want you to use your gifts and your talents.’”

Since 2004, Cameron has served the Clarks Grove congregation, and he has coached in Albert Lea’s volleyball program for the last eight years.

“It’s a very smooth transition,” she said. “He has a lot of passion and knowledge of the game. Those two things right there are huge assets, and he has a great attitude.”

Cameron has experience on the court at each position, but he prefers to be a right-side hitter. 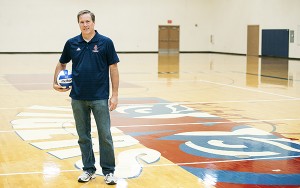 Jamie Cameron stands on the court on Aug. 3 at Albert Lea High School. After eight years at various levels in the program, this year will be Cameron’s first as the varsity volleyball head coach. -Micah Bader/Albert Lea Tribune

“I’ve always been playing in leagues from the time I was 18 because I love to play,” he said.

Cameron’s journey with the Tigers began with two years as a B-squad coach followed by six years of coaching the eighth-grade team. He also started Team Club Volleyball, which is a member of USA Volleyball and helps players develop during the winter.

TCV is not only for volleyball players from Albert Lea. The goal of the club is to increase the level of play in south central Minnesota and northern Iowa, Cameron said.

Now that Cameron took the varsity position, his daughter, Krystina Cameron, took over as director for TCV and is on the high school staff. Other coaches on Cameron’s staff include Ruth DeHaan and Cathy Baumann, a former head coach at Westbrook-Walnut Grove.

“Seeing where they start and where they end is rewarding,” he said. “It goes beyond volleyball and into the workplace when they realize that hard work pays off.”

In preparation to serve First Baptist Church, Cameron said he graduated from Judson University in Elgin, Illinois, and received his Master of Divinity degree from Northern Baptist Theological Seminary in Lombard, Illinois.

After spending time as a youth pastor and camp director, Cameron was hired at First Baptist Church.

“I applied and was interviewed, and we figured it was a great match,” he said.

Along with his pastoral and coaching duties, Cameron said he enjoys riding his ’94 Honda Shadow 1100 and playing paintball. He said he also used to race all-terrain vehicles.

“I come from a family with five boys,” Cameron said. “We’d do anything adventurous.”

“I’m excited to get started, and I’m looking forward to the season,” Cameron said.