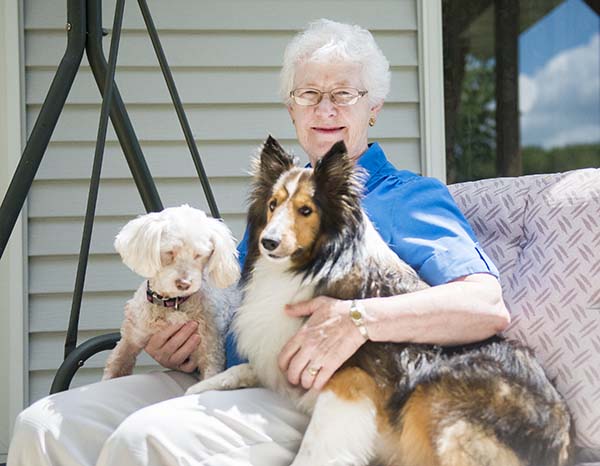 Having recently retired from ServiceMaster after 35 years in the business, Marcia Stoneking said she plans to travel and spend time with her family — especially her dogs Conway and Charley. Colleen Harrison/Albert Lea Tribune

After more than 50 years in business, an Albert Lea family’s ties to a worldwide cleaning franchise have come to an end.

Marcia Stoneking retired June 30 from ServiceMaster — a professional cleaning service — after working with the company for 35 years. She owned and ran her branch of the franchise for the past 26 years.

In 1976, Steve Stoneking bought the business from their parents and took over management of the franchise. Marcia Stoneking started working with her brother in 1980, until the siblings split the business in 1989.

“They’re in that order for a reason,” she said. “Do the first one and the other three will fall in line.”

As far as running her own business, Marcia Stoneking said she enjoyed the freedom of being her own boss.

She doesn’t think she’ll miss the physical aspect of the job, or the constant need to stay up with legislation regulations on minimum wage and other business aspects. She said she always wanted to pay her employees what they were worth, but that contract bids and other aspects needed to be considered in order to keep the business strong.

The main competition for her franchise was always the “mom and pop” businesses, Marcia Stoneking said, as they could clean locations for less, had no franchise fees and didn’t have to pay minimum wage, among other reasons.

Marcia Stoneking said that running one’s own business can be a challenge, but that those pursuing it should stick with it. She compared it to a marriage, saying that it’s something to commit to through tough times as well as good times.

In retirement, Marcia Stoneking said she plans to travel to places she has never been before, as well as visit her family members that live out of town. In her spare time she likes to go bowling, and likes watching Minnesota Twins and Vikings games.

After about one month of being retired, Marcia Stoneking said the last few weeks have been the first where she has actually felt retired. Her first few weeks were spent cleaning and organizing her own home.

Livelihood: Recently retired after 35 years of working for the ServiceMaster franchise.