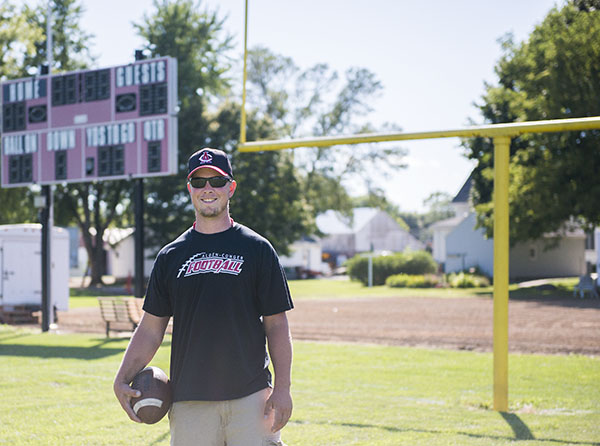 Chad Mattson chose to lead the Knights along with his fellow colleagues, assistant coaches Casey Soost and Josh Sorensen. Mattson has been signed as coach for a year-to-year contract.

He applied for the job after Tim Wussow, the past to-be varsity coach, made a decision to take a job closer to home. While Mattson was originally the assistant coach, the school made the decision to bump him up to the head position. In the eyes of the school, Mattson had the experience and potential fit for the job.

He took the position due to his love for the game and the convenience of it.

Mattson grew up in Alden, played football for the Knights in his high school years and also coached Alden-Conger football from 2004 to 2009. Now, he has been working as a self-employed carpenter with three young children at home. 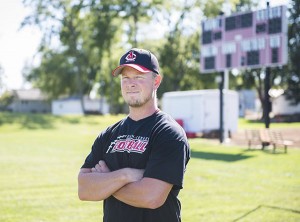 Chad Mattson will coach the Alden-Conger High School football team this season. He will be assisted by Casey Soost and Josh Sorensen. Mattson coached the Knights from 2004 to 2009, and the team went 34-26. Last season, Alden-Conger was 2-7. – Colleen Harrison/Albert Lea Tribune

He has made plans to better the football team by pushing the team to work hard during practice and by providing them with some of his and the other coaches’ new strategies.

“We’re looking to build off of last year,” Mattson said. “We’re hoping they can learn from things on the way.”

Mattson spoke of his commitment to better his team with upcoming games against hard competition. The team has been younger than most varsity teams and they will face a tough district, but he said he hopes to guide them in the right direction for more success this season and future seasons to come.

“We’ll start with game one, but we want to get these boys to get used to winning,” he said. “They work hard and enjoy it. They’re young, but willing to work through that.”

The Knights will have their first home varsity game at 7 p.m. Saturday against the West Lutheran Warriors.