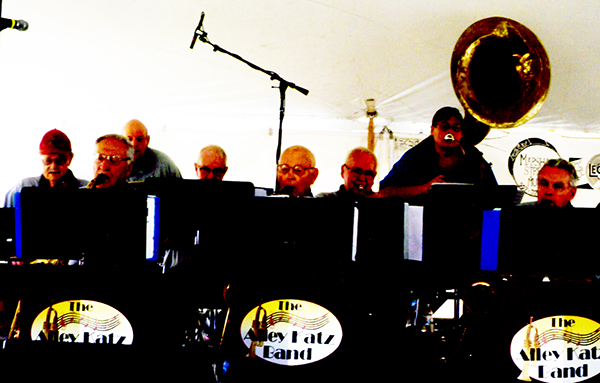 If you attended the Freeborn County Fair Aug. 5, and stopped by the entertainment center at noon on the southwest part of the fairgrounds, you were entertained by a popular local band called the Alley Katz Polka band.

There are many well-known local bands in the Freeborn County area and each one has a history and probably have many stories on the places they’ve performed and the variety of music they play. However, the Alley Katz Polka Band is unique in many ways from other bands.

First, the Alley Katz Polka band leader is 89-year-old Bill Vosler, a resident of Albert Lea. Vosler is most likely the oldest band leader in the county. Vosler has been playing the trumpet and performing in various bands for about 75 years — starting when he was about 15.

The Alley Katz Polka band has been in existence for several years and usually has about seven to 10 members when performing. A spin-off band from the Alley Katz Polka Band called the Road House Gang has only about five Alley Katz members and plays for smaller audiences. The music played by both bands are usually polkas, waltzes and what Vosler calls “modern spin” music.

Also unique is the average age of the band members is about 80 years old with the ages ranging from the mid-60s to 89. Most band members not only play for the Alley Katz Polka Band and the Road House Gang, but also play for other area bands such as Blue Banners, The Over 60 Band and the Albert Lea Community Band.

The Alley Katz Polka band performs about 15 times a year with appearances at the Albert Lea Knights of Columbus, the Albert Lea American Legion, Freeborn, Mower and Steele County fairs and some local rest homes. The band also has a parade wagon in the annual Albert Lea Third of July Parade — playing its favorite music during the parade. The band is in other summer parades in southwestern Minnesota as well.