Funeral Services for Alma “Sylvia” Dodge of New Richland will be at 2 p.m. Sunday at Trinity Lutheran Church in New Richland. The Rev. Paul Andree will officiate. Interment will be in St. Olaf Cemetery. Visitation will be one hour before the service at the church. Friedrich/Bonnerup Funeral Service is assisting the family. 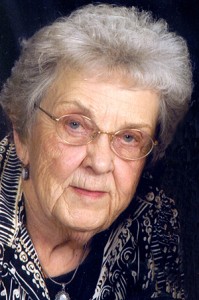 She was born Alma Sylvia on June 18, 1921, in Freeborn County, the daughter of Selmer and Anna (Olson) Tukua. Sylvia graduated from  New Richland High School. She married Gene C. Dodge on June 5, 1943, in Santa Ana, California. They had celebrated 70 years together before Gene died in 2013.

In addition to making a loving home for her family, Sylvia had worked beside her husband, Gene, as they operated Dodge’s Our Own Hardware. She also worked as funeral assistant and caretaker at Friedrich/Bonnerup Funeral Service for many years.

Sylvia was a member of Trinity Lutheran Church in New Richland where she had been active and served as president of ladies aid and circles.

She was a member of the American Legion Auxiliary for more than 69 years.Sylvia enjoyed quilting both at home and also with the quilting group at church and also enjoyed playing and participating in bridge club.